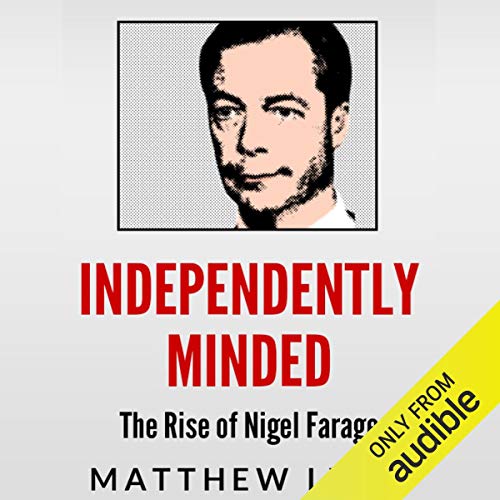 Nigel Farage is a maverick and an outsider. But perhaps more than anyone else, he is now shaping the British political agenda. Under his leadership the United Kingdom Independence Party has been turned from a fringe organisation into a new political force, winning seats in the European Parliament and on local councils across the country.

Farage has been called a "rabble-rouser", as well as "a man of the people". But he is a far more complex character than most people appreciate. Despite all sorts of flaws, he has succeeded in challenging the very basis of the political establishment. Independently Minded: The Rise of Nigel Farage tells the story of the ascent of Farage and his party. Based on extensive interviews with Farage, this study explains how he became a politician and examines his motives and methods. Part eurosceptic, part classical liberal, part bloke down the pub - Farage is wholly his own man.

Matthew Lynn's insightful biography examines not only where Nigel Farage came from but what the future holds for him and his party. Where does UKIP go from here? How many seats can it win in Europe? Will Farage’s story end in triumph…tragedy…or bathetic anticlimax? Independently Minded: The Rise of Nigel Farage is not just a book about one man - it is also a book about the state of Britain today, and its choices, identity and prospects.

Matthew Lynn is a journalist and author who writes for The Sunday Times, The Spectator, Bloomberg and The Wall Street Journal Marketwatch. His books include Bust: Greece, the Euro and the Sovereign Debt Crisis and the Death Force series of thrillers.

What listeners say about Independently Minded

Left me wanting more, both from the book and Nigel Farage.

This is a very interesting but very short account; I feel like I’ve barely scratched the surface. It did, however, provide an interesting insight into his character, based as it is on interviews both with NF and those who have known him at various stages in his life. I bought this book because I’m a great fan. Perhaps the most useful thing I’ve emerged with is a sense of his limitations and need to rebel. Hopefully, these will prevent me becoming too starry-eyed about his prospects!

He can speak without trying to please everyone.

Interesting brief Bio on mr Farage particularly the fact that it was published a few years before the Brexit vote. He isn't a politically correct glossy politician which goes in his favour.

One sided, out of date

Not a bad listen by any stretch, however the material is very one-sided in favour of its subject, also quite out of date.