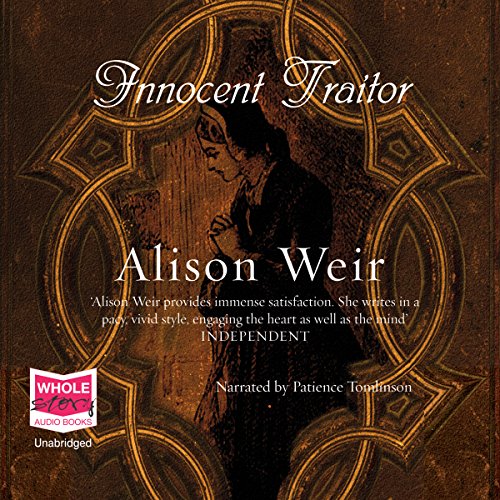 Lady Jane Grey was born into the most dangerous of times. Child of a scheming father and a ruthless mother for whom she was a pawn in a dynastic game with the highest stakes, she lived a life in thrall to political machinations and lethal religious fervour.

Growing up with the future Queen Elizabeth and her reluctant nemesis, Mary, she soon learned the truth of the values imparted to her by Henry VIII's last Queen, Katherine Parr. Her honesty, intelligence and strength of character carried her through all the vicious twists of Tudor power politics to her nine-day reign and its unbearably poignant conclusion.

"Alison Weir provides immense satisfaction. She writes in a pacy, vivid style, engaging the heart as well as the mind." ( The Independent)

Other novels by the author have touched on the tragic life of Lady Jane Grey, but this book gives a detailed account of her story interwoven with the events surrounding her short time on this earth. Descriptions of historical events and the actions of the main players of the Tudor period are enlivened by the author’s imagination in creating possible conversations and experiences creating a narrative akin to a drama. Although we know Jane’s eventual fate the story leading up to it is gripping and saddening. A precociously clever girl wishing only for a quiet, studious life, but who had to suffer having an abusive, monster of a mother and be used as a pawn in the ambitions of her parents and other aristocrats vying for power and influence. It was tough being a well-born girl in those days!

I greatly enjoyed this entertaining and educational approach to history.

The narrator does a great job of dramatising the imagined dialogue with her facility in creating voices for different ages, sexes and social classes.

best historical novel that i have. read for a long time. excellent naration. a unique insight into Tudor court life

I am normally a Phillipa Gregory reader , but thoroughly enjoyed this book . with the chopping and changing of characters you couldn't afford to lose concentration for a moment.but a great listen

Where does Innocent Traitor rank among all the audiobooks you’ve listened to so far?

This is the first review I have written for an audio book but after listening to this wonderful story I felt I had to share my experience. For me, it is the beautiful narration by Patience Tomlinson that was the key to my enjoyment of this wonderful book. I had read the book in print on its release but of late I have had to rely more on audio books and was struggling with the transition but on hearing this beautiful narration I was completely hooked. She masters the characters voices complete with different dialects and accents and she does not falter. The story itself is wonderful and if you like a historical drama based on fact then this is certainly the book for you. I am so taken with the wonderful narration that I intend to look for other books by this brilliant and talented narrator.

Although I loved the story the narrator brought it to life.

An absolutely wonderful performance that has without a doubt after a long struggle with the transition from print to audio finally converted me with her wonderful performance I think I can say after reading this in print on its publication I enjoyed the audio version more than the printed book itself. She brought all the characters to life.

I have always been fascinated with Lady Jane Grey and have read many books both fact and fiction and this is probably one of my favorites.

I love history books including historical fiction. I knew the story of Lady Jane Grey from studying at school but this story really brings it home just how weird that particular point of history got. Touring and frying of religious zealots on both sides proves how divisive religion can be, leading to death destruction of both people and, almost, nations. A wonderful read.

very much enjoyed this book. the narration was of a high standard.
I highly recommend this book

Voice grated on me

I hate to moan but I just couldn't finish this as the voice for the young Lady Gray was grating and whiny and not that much better for other characters. Didn't enjoy at all. Shame as I suspect it could have been a good story.

The Queen That Never Was

There are many books out there penned by accomplished historians that are well researched and written. however, when a historian as knowledgable and skilled as a writer as Alison Weir weaves the historical facts into a fictionalized narrative, we see and can appreciate much more about the people at the heart of the story. What Weir does here by blending solid historical fact with highly plausible fictional missing pieces is to go beyond the often detailed, but rather dry facts of history and adds flavour to them.

I have read many of Weir's thoroughly researched and comprehensive non fiction works, but I've found that it's her fictionalised treatments that really give the reader a fuller and broader understanding of the human elements to the historical accounts. I was unsure, at first, whether fictionalized incarnations of historical accounts would dilute and perhaps trivialize the essence of historical truths, but I was pleasantly surprised to find that these types of works only furthered my understanding and appreciation of those accounts.

With Alison Weir at the helm, you know that these interpretations of the missing elements that fill in the complex jigsaw of history, will be done superbly well and that all fictional elements are carefully thought out and consistent with the known facts.

So, with that long winded preamble, what did I think of this book? Well, initially I wasn't too enthralled as the story begins right at the time of the birth of Lady Jane herself, so I imagine there is a hefty amount of fictional gap filling going on. Not that this was an issue, rather I found the pace to be rather on the slower side and perhaps less interesting in regards the overall arc of her character. However, I do understand why Weir took this approach. As readers, she takes us on Jane's life journey to better allow us to get to know and understand her. I suppose the modern term might be 'World building'.

Of note was the fact that this book is written in the first person perspective with the narrative switching between characters as we listen to their thoughts and experiences through their eyes, almost in verbose diary like style at times.

There is a helpful author's note at the end of the book that gives us insights into what was fact and what had to be fiction due to lack of historical accounts. However, as someone very unfamiliar with the Lady Jane Grey story, I am left wondering, for example, just how cruel and manipulative her parents actually were. I can well believe how her parents were depicted here as cold and unloving, particularly her mother. Girls, and boys to a lesser degree, were seen as means to an end in the social climbing marriage market. Many children were used as pawns by their parents during this period in history, so I can well believe their behaviour towards their daughter.

I found it interesting to see how the character of what history became to refer to as "Bloody Mary" wasn't initially portrayed as the vengeful religious zealot intent of executing all those that didn't conform to the "true" religion. instead, Weir shows us that she was more merciful, at least at first, until her own uncertain power base and desire for her foreign prince led her down a more bloody path.

Narration was provided by Patience Tomlinson, who did a superb job. Her ability to seamlessly and instantly switch voices between characters - both male and female along with her ability to do a range of accents really impressed me. Furthermore, I noted how she was able to subtly alter Jane's voice from that of a small child and transition it as she aged was clever and skilful.

Weir's fictionalized treatments also run to the superb Six Queens series, which I urge those interested in this rich and tumultuous period of English history to read. At the time of writing, I am eagerly awaiting Catherine Howard's story.

It would be fair to say that I have learned and retained far more history through these fictionalized works than the often dry factual books, as well written and researched as those are. With Weir's massive historical knowledge, these fictionalized books will really give readers a much deeper understanding of the events depicted by really expanding upon the human elements in these accounts.

Innocent Traitor is a somewhat slow burner initially, but really rewards the reader by the end. Another truly masterful piece of writing by Alison Weir.

I was gripped from the start, so much backstabbing and false accusations. my heart went out to Jane. the narrator was good but there really should have been a man to do the male voices, as she sounded terrible.

Fascinating, wonderful and emotional, a tragic heroine that will steal your heart

This is the best book by Alison Weir in my opinion, and the narration is excellent and faultless. I cannot recommend this highly enough, it has captured my imagination and enthralled me throughout. I warn you the ending is utterly heartbreaking and literally made me sob. Please try this book you won’t regret it.

I loved the writing style, to hear it from different points of view was great

alternative voices so bad they ruined the story. characters not at all engaging. quite boring