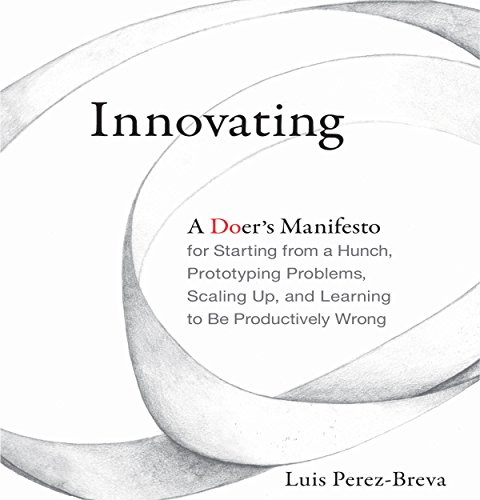 A Doer's Manifesto for Starting from a Hunch, Prototyping Problems, Scaling Up, and Learning to Be Productively Wrong
Written by: Luis Perez-Breva
Narrated by: Tim Andres Pabon
Length: 10 hrs and 13 mins
Categories: Business & Money, Careers

Innovation is the subject of countless books and courses, but there's very little out there about how you actually innovate. Innovation and entrepreneurship are not one and the same, although aspiring innovators often think of them that way. They are told to get an idea and a team and to build a show-and-tell for potential investors. In Innovating, Luis Perez-Breva describes another approach - a doer's approach developed over a decade at MIT and internationally in workshops, classes, and companies. He shows that to start innovating doesn't require an earth-shattering idea; all it takes is a hunch. Anyone can do it. By prototyping a problem and learning by being wrong, innovating can be scaled up to make an impact. As Perez-Breva demonstrates, "no thing is new" at the outset of what we only later celebrate as innovation.

In Innovating, the process is shown to be empirical, experimental, nonlinear, and incremental. You give your hunch the structure of a problem. Anything can be a part. Your innovating accrues other people's knowledge and skills. Perez-Breva describes how to create a kit for innovating and outlines questions that will help you think in new ways. Finally, he shows how to systematize what you've learned: to advocate, communicate, scale up, manage innovating continuously, and document - "you need a notebook to converse with yourself," he advises. Everyone interested in innovating also needs to get this audiobook.

I will listen to this book a million times!! I wish I had read this books years ago.

Insightful but too academic

The concept of becoming less wrong was an insightful twist that has helped me in my work. Looking at everything I do and use as parts has helped frame my vocabulary and thinking in a new and far more effective way. But the word choice and sentence structure made this incredibly hard to follow. The writing style is very academic and formal, which translated very poorly to an audio book.