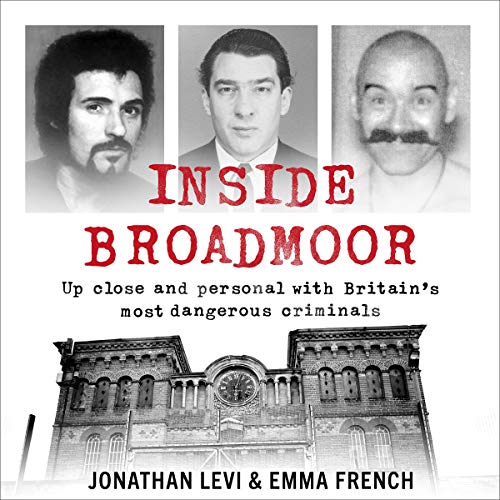 'There is time and then there is Broadmoor time.'

Broadmoor. Few place names in the world have such chilling resonance. For over 150 years, it has contained the UK's most violent, dangerous and psychopathic.

Since opening as an asylum for the criminally insane in 1863 it has housed the perpetrators of many of the most shocking crimes in history; including Jack the Ripper suspect James Kelly, serial killers Peter Sutcliffe, John Straffen and Kenneth Erskine, armed robber Charles Bronson, gangster Ronnie Kray, and cannibal Peter Bryan.

The truth about what goes on behind the Victorian walls of the high security hospital has largely remained a mystery, but now with unprecedented access TV journalist Jonathan Levi and cultural historian Emma French paint a vivid picture of life at Broadmoor, after nearly a decade observing and speaking to those on the inside.

Including interviews with the staff, its experts and the patients themselves, Inside Broadmoor is the most comprehensive study of the institution to-date.

Published at the dawn of a new era for the hospital, this is the full story of Broadmoor's past, present and future and a dark but enlightening journey into the minds of Britain's most dangerous and how they are treated.

What listeners say about Inside Broadmoor

With respect, this book is almost like a holiday brochure. With glowing reports of Broadmoor, the staff and prisoners.
I was quite tempted to book a holiday there!
The only thing missing was a Unicorn farting rainbows 🌈
It felt far to twee, and biased towards happy clappy outcomes.

it was interesting on the history of the building , not sure we needed to know about longstanding staff who worked there , not enough psychology for me regards personality disorders more a history lesson and costing

This was a very interesting look at life in the High Security estate. As an employee of HMP I found that it made me think differently about people being unaware of the crimes they commit. How do we deal with that ?

Hard facts (and sometimes hard to listen to!) told in an engaging and non sensational way. Covers the history, use and future of Broadmoor and also some of its dark past including the one criminal who wasn’t a patient, but a welcomed visitor and holder of keys, Jimmy Saville.

Some really sad stories that will stay with me of patients that were doomed to go there from childhood and hope that things are much better today than in the 80’s when it was ‘notorious’ and known more for the people it housed than the work it did.

A brilliant book for anybody interested in crime and procedures, and history.

growing up near Broadmoor this brought it back to life very informative excellent narrator .

interesting read from start to finish.

From the history of Broadmoor to the patients that have lived here, i really enjoyed this book. the only criticism i would say is that some names have been altered to protect families and victims but i would like to know more about their cases/crimes. Still a very good book.

A fascinating insight, that's factual and not sensationalist. A riveting listen, I couldn't drag myself away!

brilliant, I grew up in Crowthorne and broadmoor was a big part of the village life

Loved learning about a different part of history.
Well written and interesting, although a few sentences are repeated which is a bit annoying!

Where the poop gets thrown

I enjoyed the book, it had some shocking stories and also some sad ones. As a sufferer of mental health issues, a lot of the stories resonated with me on a deep level, although I've not committed any vile acts like those mentioned in the book. It wasn't the most exciting accounts of life behind bars (of sorts) but still worthwhile if you're into these kinds of yarns. Cheers.

Well worth a listen. I just wish it was a longer book but that isn't what the writers were going for.

Good casual listen. Narrator has a nice voice. Interesting subject matter. Well paced. Doesn’t really have the tales of inmates if that is what you are looking for.

I really enjoyed this fascinating insight into what is arguably the most famous hospital in the world. The stories of the very infamous patients and the long standing staff kept me riveted.

I lived as a young child close to Broadmoor, in Camberley from 1960 to 1968 when my family emigrated to Australia. I can still hear the siren and my mother having a panic attack and not allowing us to go outside.
I enjoyed this book the first couple of chapters are a bit slow but it picks up and is well worth the read.

This was so interesting. Changed some of my views on mass murderers and others with severe mental health issues

Found this to be very interesting and informative . l enjoyed learning about the passed and how it is now. How much the treatment of mental illness has changed. The narrator was excellent.

The first case study is graphic and disturbing but don’t let that put you off. Most of the book is much less disturbing. This book is an interesting mix of social history and true crime and it is done really well. Plenty to learn about how we have treated the “criminally insane” over many decades and interesting analysis of whether rehabilitation is a reasonable and realistic goal in this space.

Worth it for a cold winter night

not what I was expecting , but all the same , fairly interesting . although a bit amateurish in the writing , but I may be over critical