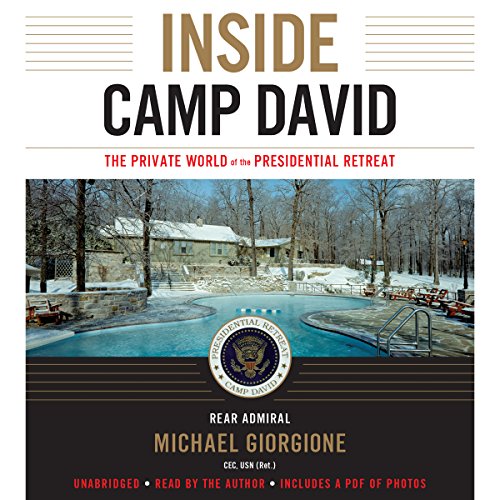 The first insider account, timed to the 75th anniversary of Camp David

Camp David is American diplomacy's secret weapon. The home of the 2015 GCC and 2012 G8 summits, the 2000 Peace Summit, and the 1978 Peace Accords, the camp has played a vital role in American history over the past century, inviting presidents and international leaders alike to converge, converse, and, perhaps most importantly, relax.

A peaceful mountaintop setting crucially removed from the constant scrutiny of the press, Camp David has served as both a site of critical diplomacy and unparalleled tranquility. It is where President and Mrs. Reagan rode horses through the mountains, where Gerald Ford could take a moment to jump on a trampoline with his daughter, where Nixon rode shotgun with Soviet President Leonid Brezhnev, and where Jimmy Carter could find the ultimate flight-sledding - only to break his clavicle two weeks before the end of his tenure. Under the pressure and stress, it is easy to forget that those occupying the highest seat in the land are, at the end of the day, human, but at Camp David, we finally get to see these leaders at their most vulnerable, their most unguarded, and as their most true selves.

PLEASE NOTE: When you purchase this title, the accompanying material will be available in your Library section along with the audio.

" Inside Camp David gives a first-hand account of the president's most private retreat from an author who ran it. Camp David is part sanctuary, part office, and part vacation destination. Giorgione captures life at the exclusive retreat and offers a glimpse into the lives of presidents and their families when they're seeking a respite from the spotlight." (Kate Andersen Brower, New York Times best-selling author of The Residence and First Women)
"No one has a better understanding of this mountain retreat than the commanding officer. Inside Camp David provides an insight into life at this secret hideaway used by presidents and their families over the years. It is an accurate portrayal of life as it is lived by the commander in chief away from the White House." (Clint Hill, number one New York Times best-selling author of Five Presidents)

was great to listen to. always nice to hear a non political view from those that serve.

This insider ( a one time Commander of the Navy team that operates CAmp David) is a warm, compassionate, insightful story teller. Not in the least bit partisan, he provided a truly human and anecdote rich story of the truly unique place. Only downside: in a few places the stories for a bit long winded. But thoroughly enjoyed it.

Wonderfully written and narrated book that provided first hand and meticulously researched history of Camp David. Honestly I was stunned at this masterfully crafted work of literature. The introduction to Camp David in the first few pages was vivid and almost poetic, not something I expected from a military officer. This first hand account of the presidents at their most unguarded moments was intimate and a reminder that the leaders of the free world are human. In just a few pages the author destroyed long standing stereotypes of mine about several presidents. One would have to read ten plus biographies of the presidents since FDR to gain a glimmer of this kind of insight. Almost all of our nation's leaders were fans of Camp David, and I think anyone who reads or listens to this book will be too. This book is a MUST read for history buffs, presidential scholars, and military officers to name just a few. As an avid TV critic and unabashed reality TV junkie, I believe this book could be the basis of a major motion picture, TV mini-series (think History Channel with 1 episode for each president), or prime time TV series loosely based on historical events. Whatever the case, I hope to see more from the author, Michael Giorgione.

I thoroughly enjoyed this book. Mike captured the atmosphere of the camp and the people who serve their perfectly. It brought back great memories of the most challenging and fulfilling job I ever had. A truly inspiring place.