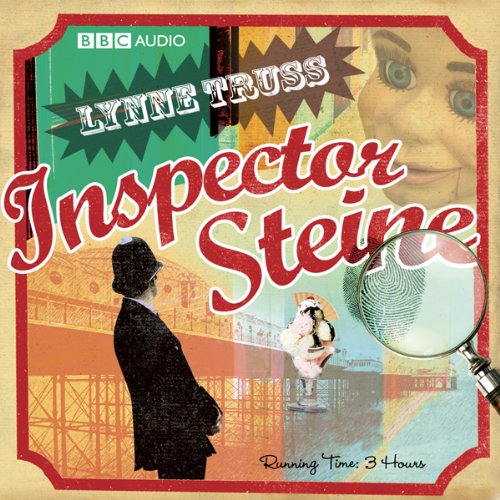 Step forward Inspector Steine. Naive and innocent, he believes that he wiped out all the villains at a single stroke in the Middle Street Massacre when seventeen local hoodlums gunned each other to death. Fortunately, long-suffering Sergeant Brunswick is at hand to help Steine with his enquiries. Aided by keen Constable Twitten, they must find the criminal mastermind who is operating undetected in their midst.

In these six episodes, a headless corpse is found on the Palace Pier ghost train; a foppish London theatre critic is found dead after a performance of a kitchen-sink drama; and the Inspector decides to go undercover at the Black Cat Casino – while a robbery takes place in the bank next door to the police station. In addition, Ventriloquist Vince receives threats after moving his booth to a new pitch; Steine falls in love with Adelaide Vine, the beautiful owner of a fish and chip shop; and ponders how to celebrate the five-year anniversary of the Middle Street Massacre: unaware that a deranged criminal has escaped from Broadmoor with revenge on his lips...

Starring Michael Fenton Stevens as Steine and Jan Ravens as Mrs Groynes, this perfectly-judged blend of humour, nostalgia and mystery from bestselling author Lynne Truss makes for an irresistible listen.

not to be taken too seriously. this is well acted, slightly wistful salute too comedy great of the era. Enjoy with whimsy and this will do everything I says it does on the package😁

Where does Inspector Steine (Dramatised) rank among all the audiobooks you’ve listened to so far?

This story is very witty. I listened to this on a long flight to pass the time. It was laugh out loud funny. I was so annoyed when we came to land as I hadn't listened to it all - had to finish listening to it when I reached the hotel. Wish there were more!

Not funny except for one line

Boring poor script presumably it was meant to be predictable .... It was but totally lacked humour or entertainment value performance was good the content was poor

A bit of humour around a bit of detection

A little far fetched but makes you smile, gives you a laugh, and is quite entertaining and easy to listen to!

This was just too lightweight and also slightly irritating. It passed the time, but not something I will listen to again.

I came across this and wasn't quite sure what it would be like - thinking of Lynn Truss as the type of erudite writer who is going to pick up on grammatical lapses etc. and perhaps be a bit too 'serious'.
I wanted something light and enjoyable for a journey and this fitted the bill perfectly.
Inspector Steine and his worthy officers are engagingly outwitted by the clever and ever present station char-lady (marvellous characterisation by Jan Ravens), who as the 'Mr. Big' keeps the boys in blue busy with cunning crimes, after picking up tips back at the station, whilst busy flicking her duster and feeding them tea and sticky buns.. The whole thing had an innocence and appeal about it - funny, touching and most enjoyable.

I wish I hadn't downloaded this story, as it got on my nerves. I am an Agatha Christie fan, and love any sort of whodunit. This was just trying to be a funny sort of mystery, and it failed abysmally. I wont bother getting any more. Oh well, at least I can delete it from my ipod.

What could Lynne Truss have done to make this a more enjoyable book for you?

Stop trying to be funny, and make it a real whodunit. the inspector was an idiot

it wasn't the actors, it was the story....hate it.