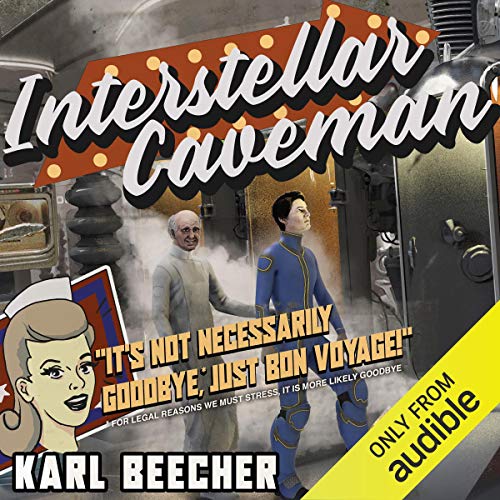 You think you’re struggling to find your place in the universe?

Consider poor old Colin Douglass, a terminally ill insurance agent who awakens from centuries in cryogenic freeze to find Earth is a devastated wasteland. Now, he’s being pursued by a homicidal interstellar tourist board, and calculating insurance dividends is as outdated as making stone axes.

Sci-fi-hating technophobe Colin embarks on a desperate struggle to find a cure for his illness, as well as a place for himself in this strange new galaxy where toilets talk back, and door handles are a long-forgotten relic. Only by teaming up with his rescuer, hard-boiled, space-traveling archaeologist Tyresa Jak (that’s Doctor Jak to you), can Colin hope to succeed before time runs out.

Along the way, this galactic odd-couple must evade the Erd Tourist Board - a powerful mega-corporation which will do anything to ensure the mythical Earth stays mythical - and deal with a crackpot religious cult who not only possess a cure for Colin’s illness, but who also believe there is more to this caveman from Earth than meets the eye....

Don't miss the start of this side-splitting intergalactic adventure. It's perfect for fans of Guardians of the Galaxy, The Hitchhiker's Guide to the Galaxy, and Space Team.

Collin is an English insurance person who has been having problems with his eyesight and migraines. On the day he's to see the Dr he is released from employment so he may go forth into a new path. At the Dr office he is this he had a medical condition that will progress and eventually kill him. After speaking to his friends he decides to try cryogenics. Fat forward a few years, ok centuries, and he is discovered by an adventurous archeology professor. From this point Collin's life takes on the Syfy quality that he had always abhored. Life in the future is too fraught with danger and crazy aliens!
Steve West is a remarkable narrator who brings Collin and friends to life and whose voice draws you into the story!!
Fantastic audio and story!!!

Man, this book was beyond enjoyable. My favorite cartoon of all time is Futurama. This is what Futurama would look like as a novel written for adults. It's funny, entertaining, but also brings the serious space opera vibe to the table.

The cover is odd—but it made me buy it.

An everyman's man out in space- Good stuff

I've been looking for something similar to HHGTG for a while and I've found it. When I saw that I had an option to be given this book in exchange for an honest review how could I not jump on the opportunity. It's pretty impossible not to love hearing about a reluctant space traveler trapped out of his own space and time. This book was an absolute joy to listen to. The characters are easy to relate to. I really enjoy how passively the main character tries to get through life and how the universe refuses to let him remain passive.

Karl Beecher has cranked out a hilarious portal story when the main character, Colin is catapulted thousands of years into the future, where he subtly insults everyone with classic dry British humor and great use of classic humor tropes is well executed.
Steve west is also becoming one of my favourite narrators.

A great book! Good british humor and an intriguing story as well. The absurdness of a present day person being thrown into a future spacefaring civilisation. One of the best parts of this book is the naming of characters and places (I mean...ERD! :D ). Loved the narrator as well. First time I've listened to a book he's narrated, and he did a great job. Good job for the author on his first audiobook. Looking forward to the follow up!! Can't wait to see how this story continues.

Karl Beecher channels Douglas Adams in this kooky sci-fi adventure of an insurance analyst IN SPAAAACE. But seriously, who can pass up the chance to ride the Evolutionator and explore the original pool of slime where life began? Oh, and sweet bonus: there's plentiful parking at Erd (the future name of Earth). For the complete experience, read this book with a British accent in mind, or better yet, listen to Steve West’s top notch audiobook narration.

It was a big galaxy and life was short.

OR: "Don't you ever stop moaning, Colin?"
It was a bad day for Colin Doouglas. Firstly, he was sacked from his job, replaced in his insurance job by a computer, then he discovered someone had broken into his car. Head aching and sight spotted by little white aliens, he ends the day going to his doctor's appointment to learn that he has an incurable disease and only a few more weeks to live. And yes, this is a comedy. Colin opts for a new form of cryogenics. And there we leave him - for a very long time. Until after the Earth has been lost and a new planet promoted as the birthplace of humanity...

This book is a delight. Perhaps not quite the non stop hilarity promised, but nevertheless funny, and how refreshing for the humour not to be totally dependent on schoolboy jokes and toilet guffaws. This is a good, basic thriller, too, not overly original but simply and well presented so it retains the excitement of the chase. A great intergalactic adventure story for all ages. Narration is expertly performed by Steve West who's English accented voice was the perfect foil for Colin. Not only did Mr.West individually voice all of the protagonists, his reading was perfectly paced, with good intonation and with a close adherence to the emotions of the text. His delivery really enhanced the reading experience.

My thanks to the rights holder of Interstellar Caveman, who, at my request via Aethon, freely gifted me with a complimentary copy. Perhaps not a contender for a prize in high literature, this book is sure to bring a smile and lightness of heart to any reader, especially fans of science fiction. Highly recommended for an enjoyable read

It’s a good fun light hearted book with some references to real world stuff to keep it slightly grounded. Nice listen for when you want something more upbeat and not to serious. My only complaint really is the “whiney” voice is really annoying and used a decent amount but narrator is otherwise really good and no issues and plenty of separate voices. Not 100% sure how it will look as a series but I’m curious to see.

I was given this free review copy audiobook at my request and have voluntarily left this review.

Fantastic story, though I think the ending could have been better, definitely a cliffhanger for a future sequel?

Author is a contender to be a Douglas Adams successor. Narrator is perfect for the role!

I truly enjoyed this book. The story was great and the narration was excellent. Well done!

Great, fun adventure into the future!

Humour is woven into the fabric of Colin's adventure through time. The title perfectly captures the essence of the story, although I didn't think much of it at first glance. But you know what they say!

The character development is brilliant and the language is well thought out and cleverly used. I'm a fan. The narrator did a really good job. Bring on the next book.

I recieved a review copy of this book. Its a fun romp following an average guy catapulted to a time where no one understands his cultural references. The action is good and it's well written and narrated.

Randomly downloaded this purely for the book cover, the moment I started listening I was hooked! Plowed through this in just a couple of days, love the humour, love the voice acting, looking forward to listening to the next one.

Decent enough story about Arthur I mean Colin / you see there is the issue it’s ok to pass sometime and some interesting positions but the Adams influence is there - at least for me - and this doesn’t quite hit the mark. Performance was good and engaging and would look to see more from this narrator

Great as a holiday read

I was lucky enough to be offered a free copy of this book for an honest impartial review, so here it is.

I might just have picked this up anyway as I have seen a few adverts for it and it has been on the Audible front page and the story is right up my street.

The premise without giving too much away is that our protagonist Colin gets sick and sells up his house and life to be put in stasis for a few years until medical science has found a cure for his illness. Unfortunately he's asleep for a little longer than that and this book focuses on the afterwards part and Colin's journey from being woken up to try and get his cure.

I must admit from the point of Colin waking up I thought the book would go in a very different way to what it did. He meets a sort of Interstellar female Indiana Jones type Dr Tyeresa Jack (have I spelled that right? Hard to know when you're listening!) And the book follows their journey along with some other very likable characters for what is a very light-hearted and enjoyable story.

This is definitely what I would describe as a "holiday read" being not too long, funny and easy to dive in and out of and not get lost.

Steve West the narrator does a good job and I find him best suited to humorous books with his deep bassy voice, he can take a little getting used to but really grows on you as listen.

The book is set up for the sequel which is already out and already on my wishlist. I have a feeling that now the origin story is out of the way the real adventures can begin!

What a great surprise. There are so many snippets of plots classic 80’s & early 90’s films in the book it really made me smile.

Will definitely be listening to the second book.