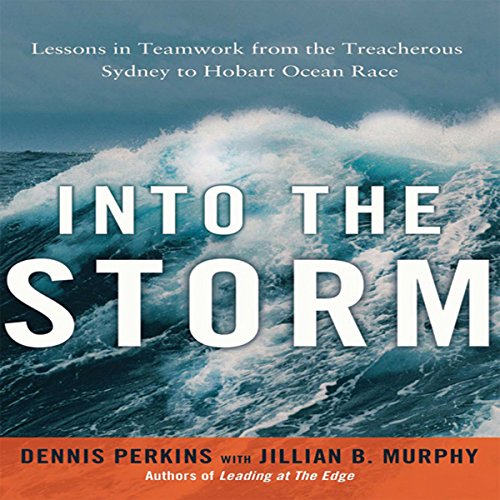 The iconic Sydney to Hobart Race, a 723-mile deepwater challenge - often called the “Everest” of offshore ocean racing - is considered one of the toughest in the world. Unpredictable weather and seas make each race demanding, but in 1998, an unexpected “weather bomb” hit the fleet, creating 80-foot waves and 100-mile-per-hour winds.

Many bigger, better-equipped boats tried to maneuver around the storm, but the crew of the AFR Midnight Rambler chose to head directly into its path. After battling mountainous waves and hurricane-force winds in the Bass Strait, the tiny 35-foot boat arrived safely in Hobart, 3 days and 16 hours later - winning the coveted Tattersall’s Cup.

What were the factors underlying this incredible achievement? Into the Storm recounts the story of the Ramblers’ stunning victory, and the teamwork that made it possible - revealing powerful lessons for success in today’s demanding business environment. Illustrated with examples from the story and compelling case studies, this riveting adventure story provides effective methods you can use to:

The Ramblers’ success resulted from an extraordinary blend of collaboration, trust, planning, and execution. Into the Storm equips you with the tools to overcome daunting odds and win your team trophy.

What listeners say about Into the Storm

I would highly recommend this book. It is an inspiring story that should be read by everyone.

Any sailor, leader, team player, survivor, rescuer and adventurer with heart and spirit will love revisiting the 1998 Sydney to Hobart for the lessons to be learned from the AFR Midnight Rambler team.

The first half and its account of the 99 Hobart is wonderful.

I found the second half less interesting as it is more of a business management module than an adventure story. Felt very disjointed in the overall context of the book and its title.