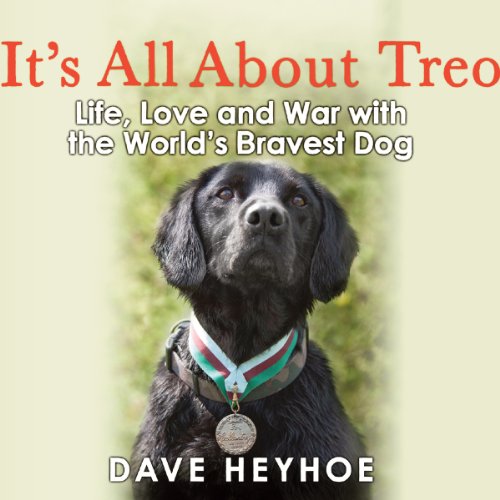 It's All About Treo

When Dave Heyhoe was sent to Afghanistan to help detect the Taliban's murderous roadside bombs, he knew he'd need a special dog by his side. Luckily for him, his closest pal, Treo, a staggeringly brave ball of energy and mischief was with him every step of the way. The two friends had a miraculous understanding that helped them save countless lives but, as they embarked on a roller-coaster emotional ride, Dave realized he needed Treo more than he could ever have imagined.

Tear-jerkingly sad one moment, laugh-out-loud hilarious the next, It's All About Treo is a moving and uplifting story that will melt the hearts of animal lovers everywhere.

"There probably is no other military dog that has saved more lives than Treo. He is truly quite remarkable" (Mike Dowling, author of Sergeant Rex)

This is a moving, true story and one I plan to listen to again I can tell. Treo and his handler let us into what is was like for them serving searching for explosives,to protect their fellow soldiers. They are heros x

so good I got to the end and started again

What did you like most about It's All About Treo?

The one where Treo won't get out of the river. It reminds you that even the best trained dogs in the world will get tunnel vision occasionally

This true story has everything. It's about loyalty trust and friendship in the face of extreme hardship and proves why dogs really are mans best friend. You don't have to be a dog lover to enjoy this book. I defy anyone to listen to this and not be touched by it in some way

Outstanding bond between a soldier and his war dog

What made the experience of listening to It's All About Treo the most enjoyable?

A truly amazing listen fixating all the way through

Soldier Dave Heyho for his total devotion passed down to Treo which kept them alive.

Most convincingly read with all the realistic characteristics of the whole situation.

Outstanding listen enthralled all the war through. The realistic descriptions, feelings and emotions create a remarkable story line.

Explosive, edge of your seat reading.

What made the experience of listening to It's All About Treo the most enjoyable?

My wife and I listened to this audio book on a long journey and it was something we both really enjoyed. I'm Ex-Forces and I understand the work that military dog handlers and their dogs do. For my wife it was a total eye opener and often she was moved to tears. This book is gritty, realistic and pulls no punches.

What other book might you compare It's All About Treo to, and why?

'Horrie The War Dog' by Roland Perry. Because like Treo, Horrie saved countless lives and was beloved by the Soldiers that he worked alongside.

I enjoyed the whole book, different chapters for different reasons. From the deployment to Afghanistan to an uncertain new life in Civvy Street.

Yes very much so, both the wife and I were moved to tears and lumps in our throats one minute and then the next we were laughing our heads off!

Would you consider the audio edition of It's All About Treo to be better than the print version?

I've already recommended this to friends and family and over the last few days on Facebook it has been the focus of my status updates too.
I must say that the voice of Malcolm Hamilton really sets the scenes the part was made for him to read. He builds up the feeling and sets the mood brilliantly. I've already read the book and this was a better experience listening to it. There were parts which really stood out with the way it was explained to the listener.
I'll still read the book in months and years to come. I'll also listen to it periodically too as I've just added it to my cars audio USB stick.

What was one of the most memorable moments of It's All About Treo?

When his friends Geordie Ken and Sasha are killed by an IED. You can feel the tone of the book change. At the back of their minds Dave and Treo must have been constantly thinking about "when is it my time".

You get a sense of that from the book but to have lived that every day all day without any break at all must have left them so tired and anxious.

A cat gets 9 lives but Dave and Treo were up in the face of any luck that they might of had each and every day. I think they were definitely being looked after by a guardian angel or their lucky Irish Shamrock played a part in their luck at least.

There were 2 really. It was the chicken shredder and rubber duck chapters which show that at the end of the day Treo is still a dog first and mans best friend second

..Always out front and in constant danger. He was our Protector, a Therapist, a comedian who made us laugh. But most of all no matter what the situation he was my friend and always there.

I'm an ex-serviceman I've worked with AES dogs and handlers in before. I've travelled the world and if ever I saw a black lab it always reminded me of my own boy at home. I was never homesick when I received letters nor missed my family as much. But my black furry faced, hazel eyed pooch was who I really missed when I was away. Sad I know.
I felt for Dave Heyhoe and Treo with them being such close friends as you would ever wish for yourself put under such stressful situations constantly. Ask yourself that question. How would I have coped?
As for me I'm no soft touch but after reading the book then listening on Audible they are now in my top heroes along with the likes of Ernest Shackleton and Sir Ranulph Fiennes.

Since finishing the book today I've searched for their information online and became a mini stalker looking for information about them, weirdo I know haha. I've even asked to be a friend on Facebook as it has really raised my appreciation and awareness of just how hazardous a job they actually did.
But the most heart warming thing is finding out that they were allowed to leave the forces together and settle into a well deserved life together putting their feet up.

what a brave brave dog,what these guys and animals went through in this terrible war was unbelievable
a fantastic read,you will not be disappointed

It's all about treo

This book has recreated my understanding of war and what it means to have a best pal , I would recommend this book to young adults

What a fantastic story, you don’t realise what our armed forces have to deal with, Treo sounds like a lovely dog and Dave Heyhoe a very caring and sensitive man, glad to hear he found happiness in the end
THANK YOU FOR YOUR SERVICE IN PROTECTING OUR SOLDERS WHILE FIGHTING IN AFGHANISTAN
YOUR BOTH HEROS TOTAL RESPECT

I put off listening this book for a long time. I don't really know why, except that I was wary of hearing about the bad experiences in a war zone of man and dog. I found it to be heartening, and will listen to it again. I thought the narrator was good too.

A must for any dog lover.

Where does It's All About Treo rank among all the audiobooks you’ve listened to so far?

This has to be one of the best audiobooks available, performed and written brilliantly.

What was one of the most memorable moments of It's All About Treo?

I can't pick out one moment, the story as a whole takes you through every emotion from laughing out loud to tears in the eyes.

The true devotion and love between a dog and handler has never been explained better than in this book, it is a joy to be allowed to share time with Dave and Treo. Thank you.

thank for a wonderful book ,for shareing this story,
i understand that to wtite this at times must have been verry hard but when you think of your lost brothers they live again , laugh and are a part of you the insite of your tour in Afghanistan was true .thank you David and Damien for the protectecion you gave unselfishly .LEST WE FORGET.