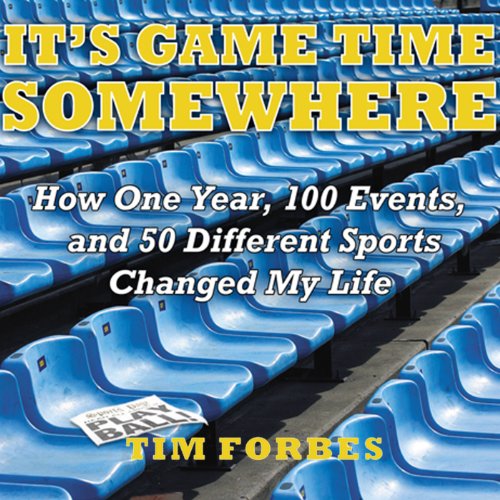 Perhaps the band Talking Heads said it best. In fact, they predicted it when they wrote the following lyric: "You may ask yourself, well, how did I get here?"

Cards on the table - author Tim Forbes is not quite right. Want proof? How else could you explain him spending a full year of his life attending 100 uniquely different sporting events - involving 50 separate sports?

Tim is a Game Junkie. He played sports endlessly as a kid, and loved sports all his life. It's the world he belonged in. At the age of 40, though, he found himself like many Americans: painfully unsatisfied in an uninspiring corporate job, but making too much money to walk away. Then, one momentous day, his wife and he struck a deal - but not just any deal. This was The Deal, which would eventually lead Tim to a cherished career in the world of sports.

Years later, having carved out a place in his new industry, Tim was surprised when a friend asked, "Do you still love sports?" What shocked him to his core, though, was that he didn’t know the answer. Of course he still loved sports! Didn't he? After all, hadn’t he walked away from a perk-filled Corporate American life to start over at the bottom - as perhaps the oldest unpaid intern in PGA Tour history? Was it possible it had all been for nothing? This was a question that downright had to be answered.

It began with a single basketball game, and the next thing he knew, Tim was charting a course to attend athletic events involving everything from A (archery) to...well, Y (yachting). Hey, you try finding a sport that starts with the letter Z.

Tim’s "sports walkabout" took him to big games and little games. To tournaments, matches, meets, and bouts. men's games, women's games. Professional. Amateur. High School. College. He saw sports that he knew intimately, and sports whose rules were a mystery to him. Some games he attended with 80,000 of his closest friends. At others, his arrival moved the needle considerably on total attendance. Did you know there was a U.S. Sumo Open? A World Kickball Championship?

Speed-dating with the entire sporting world initially revealed only painful truths, but what he ultimately learned in the most unassuming of venues had a dramatic impact on Tim’s life as a fan, a sports entrepreneur, and - however humble - an athlete.

Over the course of his sports walkabout, Tim was blessed to have met many great people. In the bleachers. On airplanes. In motel lobbies, and in all-you-can-eat breakfast spots. Their resulting conversations varied in length and in nature, but more often than not, Tim’s new friends would say something along the lines of, "You know, I never really thought about sports quite like that before."

After reading It’s Game Time Somewhere, you just might feel the same way.

What listeners say about It's Game Time Somewhere