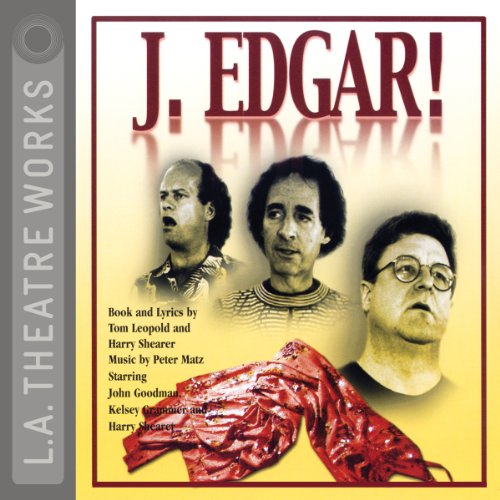 Kelsey Grammer portrays J. Edgar Hoover in this irreverent and hilarious musical spoof about one of the most powerful men in 20th century America. As head of the FBI, Hoover was privy to the secrets in the lives of many men. Now you learn about his secret love live, his need for personal privacy, and his obsession with knowing the private affairs of others. If you weren't so busy laughing, the show might upset you.
(P)1994 L.A. Theatre Works. Produced in Association with KCRW. All Rights Reserved.

In this irreverent and warmly silly ode to America’s number one G-man, longtime comic collaborators Harry Shearer (This is Spinal Tap, The Simpsons) and Tom Leopold (Seinfeld, Cheers) gathered up a veritable who’s who of American comic voice talent-from Dan Castellaneta to Christopher Guest and Annette O’Toole. Together they deliver a rousing send-up of the modern American musical. Sounding as Tin Pan Alley as humanly possible, Kelsey Grammer, as the FBI’s foundering director, J. Edgar Hoover, and John Goodman, as Hoover’s protégé, Clyde Tolson, happily sing their hearts and lungs out on their way to taking modern American history to new hilarious heights. Biting satire never sounded so in tune.

"...the inspired silliness of the premise, the able cast, and direction by Shearer carry the day." (L.A. Weekly)

What listeners say about J. Edgar!

Funny because it's true

funny because it's true.."So do you think this McCarthy fellow is going to be around awhile."
"Listen to mr. Hoover, I don't hitch my wagon to just any starter but he's got a real fire in his belly for the commies and the degenerate fellow Travelers.
"Great! if it's one thing, I'll be called by my party name."
"I'm sorry, can I get you another drink, Mary!."