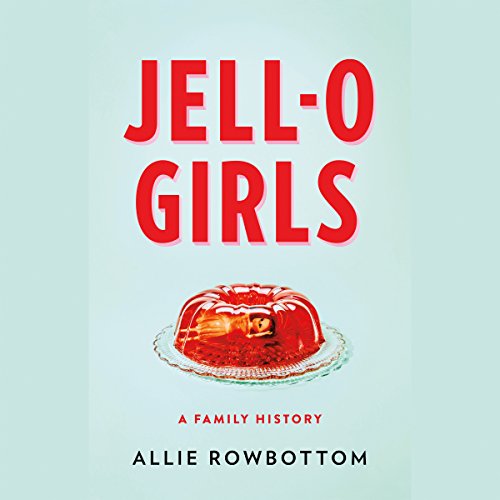 A memoir that braids the evolution of one of America's most iconic branding campaigns with the stirring tales of the women who lived behind its façade - told by the inheritor of their stories.

In 1899, Allie Rowbottom's great-great-great-uncle bought the patent to Jell-O from its inventor for $450. The sale would turn out to be one of the most profitable business deals in American history, and the generations that followed enjoyed immense privilege - but they were also haunted by suicides, cancer, alcoholism, and mysterious ailments.

More than 100 years after that deal was struck, Allie's mother Mary was diagnosed with the same incurable cancer, a disease that had also claimed her own mother's life. Determined to combat what she had come to consider the "Jell-O curse" and her looming mortality, Mary began obsessively researching her family's past, determined to understand the origins of her illness and the impact on her life of Jell-O and the traditional American values the company championed. Before she died in 2015, Mary began to send Allie boxes of her research and notes, in the hope that her daughter might write what she could not. JELL-O Girls is the liberation of that story.

A gripping examination of the dark side of an iconic American product and a moving portrait of the women who lived in the shadow of its fractured fortune, JELL-O Girls is a family history, a feminist history, and a story of motherhood, love, and loss. In crystalline prose, Rowbottom considers the roots of trauma not only in her own family, but in the American psyche as well, ultimately weaving a story that is deeply personal, as well as deeply connected to the collective female experience.

"Intimate and intriguing.... A fascinating feminist history of both a company and a family." (Publishers Weekly)

"Rowbottom delivers a moving memoir of a daughter seeking to understand her mother, family, and the place of women in American society, and the narrative also serves as a thoughtful, up-close-and-personal feminist critique of a cultural icon. A book brimming with intelligence and compassion." (Kirkus)

"Rowbottom paints a fascinating portrait of the family behind one of America's most famous desserts.... This account illuminates both the rise of an American product and dynasty. The renown of Jell-O will attract a variety of readers to this memoir, and the storytelling will keep them turning pages to the very end." (Library Journal, starred review)

Took all the fun out of Jello

There were moments that were entertaining but this is mostly an account of mental and physical manifestations of disease. References to the gelatin product were repetitive complaints against it - as if a product (and the advertising of that era) could be blamed for the ills of a family. I didn't buy into the thesis. This was a sick family with a rich ancestor who provided them with the means to squander their lives. (one successful entrepreneur can destroy a lot of generations) Definitely not worth buying at any price.

close to being good

ok. author's voice annoying and her story self indulgent. wish it went deeper into Mary's story.

The story is intriguing but can be hard to follow as it jumps around. The narrators voice is really dry and takes some getting use to.

I was excited to listen to this book since I have heard so many positive recommendations but I guess it's not for the audiobook. The narrator was monotone which I thought I could get over it but there is no voice inflection and she sounded like she had candy in her mouth. Narrators need to be passionate about what they are reading even if the subject is sad and dark. I couldn't get into the book because of the narrator.

Poor story about the Jello legacy

Just continual stories about illness and only surface info about the Jello empire history. The narrator had a monotone voice. Overall boring

4 of 5 people found this review helpful

I expected a history of Jello as a business. Instead, I got a book poorly read by its author which could have been a compilation of the author's visit to a psychiatrist over a long period of time. I found it absolutely boring.

I'm trying to finish this. I want to finish it. But I can't stand the way it is narrated. So boring. So monotone. What a drudge! I'd buy the book and read it, but I don't want to spend any more money on it.

I listened to this audio book on a long drive with some breaks & interruptions which leads to my description of finding the story erratic or convoluted. It was a guilt-ridden, gut-wrenching, heart-rending, depressing narrative of remembrance, wealth, love and loss within an undercurrent of history. It certainly kept my attention. I would like to read Judy's story and more about the LaRoy girls.

It was very sad and unhappy story. Most of the book was about hospital and vomiting.
I didn’t like it at all