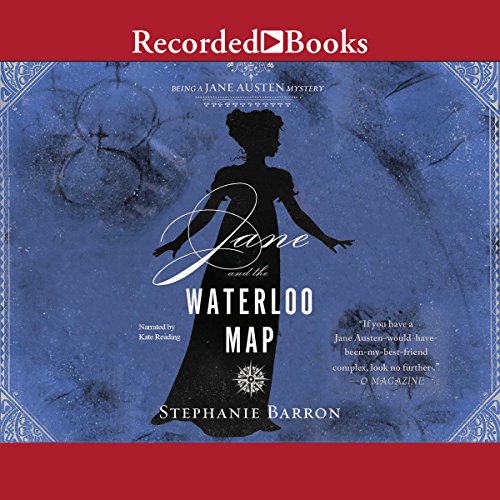 Jane and the Waterloo Map

The 13th installment in Stephanie Barron's fan favorite Being a Jane Austen Mystery series. Between novels, Victorian England's most beloved author doubles as a sleuth in often idyllic locales.

November 1815. The Battle of Waterloo has left the British economy in shreds; Henry Austen, Jane's favorite brother, is about to declare bankruptcy. The crisis destroys Henry's health, and Jane flies to his London bedside.

While she is there, the Reverend James Stanier Clarke, chaplain to His Royal Highness the Prince Regent, invites Jane to Carlton House, the Prince's fabulous London home. Jane only accepts because many of Henry's bad loans were given by the Prince Regent's cronies. She hopes to intercede with the Regent on Henry's behalf, but before she can speak to him, she stumbles upon a dying man in the library - Colonel Ivor MacFarland, who, with a knife in his entrails, utters a single failing phrase: "the Waterloo map"...and Jane is on the hunt for a treasure of incalculable value and a killer of considerable cunning.

"[A]n excellent period mystery for all historical fiction fans...Jane Austen devotees will especially appreciate immersing themselves in the many biographical details about Austen that accompany the fictional murder mystery." ( Library Journal)
"Vivid characters propel the subtle plot to its surprising conclusion. The first-person narration captures Austen's tone as revealed in her letters: candid, loving, and occasionally acerbic." ( Publishers Weekly)
"Barron has clearly done her homework in the language and manners of Austen's time.... [H]er latest venture edges out competing authors of Regency whodunits." ( Kirkus Reviews)

What listeners say about Jane and the Waterloo Map

I have read all of this series and adore it! Very enjoyable and entertaining. Love each one and this is no different.

The storyline in this book is written well, and makes one want to continue to follow it. The narrator does a rather good job with all the voices. I would recommend this to listeners.

If you've enjoyed the first 12 of these wonderful Jane Austen mysteries (as I have), you'll enjoy this one too. Stephanie Barron (aka Francine Matthews) captures Ms Austen's voice so well, you'll think you're reading an actual lost manuscript from the 1800s. For those of us who have read and re-read (and listened to and re-listened) to all of Jane Austen's works and were left wanting MORE--this Stephanie Barron series is a real treat.

LOVE this series. Jane Austen is so real, you completely forget the stories aren't true! So beautifully written. A joy just to hear the language. Narrator is phenomenal. Every character comes to life.

Such a fun read

I could not put it down. Listening whenever I had time. It is well written with great detail to historical truths in a Jane Austin style.

Cool details of the Regency...

...served up with an engaging mystery that surprises the reader with its twists and turns. I've enjoyed Jane Austen novels for decades and this is a fun way to enjoy the period anew. Its interspersed with bits of Austen dialogue and the minor trivia game of identifying names used in her novels. The atmosphere of the period, the details that Austen readers would take for granted, is drawn in a way that illuminates both the history and mystery buff.