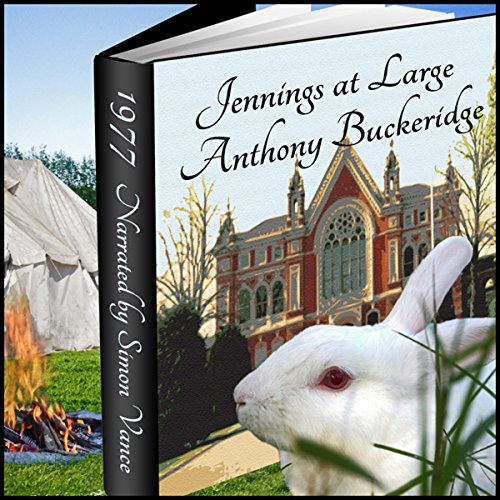 "Right! Stand by for orders to lower away. I’m going to take charge at the reception base. And don’t worry… This is one of my guaranteed foolproof plans. It can’t possibly go wrong!"

Term is over and, after a short camping expedition that leaves poor Mr Wilkins determined never to go through such an horrific experience again, Jennings is off to stay with his Aunt Angela. There, he meets Emma Sparrow who needs to hide her collection of stray animals from the exasperated caretaker. When Jennings comes up with a seemingly flawless plan, he congratulates himself on his quick thinking. But with Jennings at large, things can always be expected to go disastrously wrong! "Fossilised fish-hooks!"

Jennings at Large is one of a series of 25 books by Anthony Buckeridge. The Jennings stories originated in a series of radio plays for the BBC’s Children’s Hour, which proved so popular they spawned this delightful series of books. The tales make liberal use of Buckeridge's inventive schoolboy slang ("fossilised fish hooks!," "crystallised cheesecakes!," and others). Published between 1950 and 1989, these books were favorites among a vast assortment of kids all over the world.

Jennings Goes to School and Jennings Again! were adapted for radio by Anthony Buckeridge and read by Stephen Fry, and Mark Williams (Arthur Weasley in the Harry Potter films), recorded an abridged version of Jennings Little Hut, all produced by the BBC. Loved by kids and adults alike, the Jennings books were translated into several languages and have sold over six million worldwide. Described as “Harry Potter without magic, but funnier,” and “P.G. Wodehouse for kids,” you’ll want to check out the other titles in this series available from Post Hypnotic Press.

Great single-person narration and characterisation. Story is quite a ramble through various locations (the school, rural Home Counties and inner-city tower blocks). Not the best Jennings story, but certainly a good one and worthy of a listen.

As good as the book

We listened to this book on the car journeys of a holiday. I enjoy listening to all the Jennings audiobooks having read the print books as a child. I wish more could become available. The narrator's voice is just right for me.

Unlike most other Jenning's books "Jennings at Large" isn't only set in the school. It is interesting seeing how the author has Jennings interacting outside of the usual Linbury Court environment.

Being a huge fan of the Jennings books all my year's having them on audio book was just brilliant. They are well read and the characters brought to life in a most wonderful manner.

A good book for younger listeners

Excellently read ... a good book for younger audiences. Listen to "According To Jennings" first though.