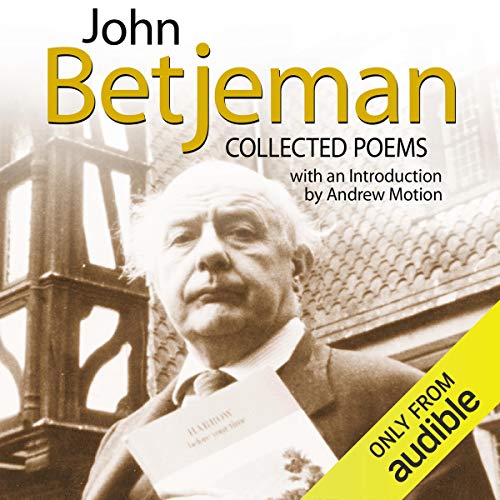 Collected Poems was first published in 1958 and has sold over two million copies. It has been reprinted numerous times and has absorbed, one by one, the volumes of additional poems that continued to appear regularly until Sir John Betjeman's death. Here for the first time is the audio edition of the Collected Poems.

From his early poems, like "Death in Leamington" and "The 'Varsity Students' Rag", through his best-known works, such as "Slough", "Upper Lambourne", "A Subaltern's Love Song to Dilton Marsh Halt", and "The Last Laugh", the unique and original poetic voice of Britain's best-loved Poet Laureate resounds throughout this remarkable collection.

What listeners say about John Betjeman

England of Church - the scones of St John’s.

It’s really enjoyable to read the work of John Betjeman end to end one after the other and get an overall flavour as well as the particular enjoyment of single stanzas, verses, the run of two or three poems together as well as being able to piece together the various themes that recur over many years and many different context. John Betjeman was a poet who appealed to me through one or two individual poems, particularly the wonderfully camp A Subaltern’s Love Song.but now having run through the Collected Poems, it is easy to identify so many insights, laughs, sad thoughts, the shock of the seedy, the decay and the camp jollity that can be remembered as 1960’s and 1970’s Britain. It is a trip back to a memory of a country that probably never was for me, but one that I really enjoyed spending time in.

The foreword by Andrew Motion is really insightful and puts an academic cast of Betjeman which is really a long way from the Radio 2 world he inhabited and inhabits - a lovely set of poems which brought me warm memories and warmth thoughts in the early Spring days of 2011 against a backdrop of troubles in the Middle East and disaster in Japan. What a world, what a world.