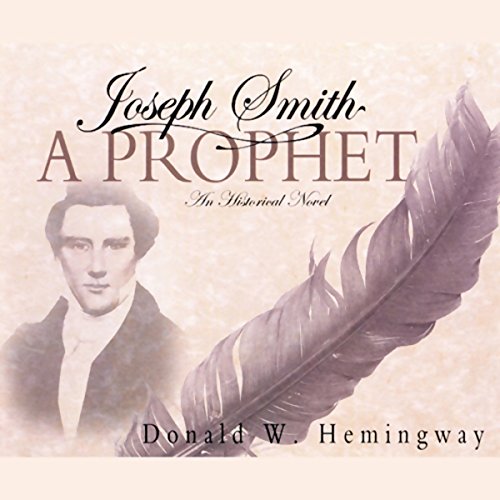 Live in the period of 1830-1844. Feel the thoughts of Brewster Cabot who followed, loved, and suffered persecution with one proclaimed to be a prophet, Joseph Smith, the man who started The Church of Jesus Christ of Latter-day Saints.
©2002 Donald W. Hemingway (P)2006 Big Happy Family, LLC
Historical
Show More Show Less

What listeners say about Joseph Smith

I expected much more than I received.

What would have made Joseph Smith better?

The title is very misleading. The story contains occasional references to Joseph Smith. It is really a book about the Mormon history and the main character's (not Joseph Smith) involvement in it.

Yes, it was fine.

What character would you cut from Joseph Smith?

He was a man of God. The story would have been much better if it would have focused on Jospeh Smith and his story.

Why don't you carry audiobooks from Deseret books?

This is an interesting fictional account of the Prophet's life. Luckily it does retell the LDS church history in an accurate and respectful manner. It also has some good, uplifting parts, but the ending is a little confusing and the overall message in unclear.

The content of this book might have been amazing,but I coud not listen to the reader ! He was terrible!

First I'll make clear that this is an account of Joseph Smith's life as if being told by the journal entries of a fictional character who became friends with him and witnessed most of the major events of the early religion as it developed during the life of its founder. However, the accounts being retold by the fictional friend are drawn from actual historical accounts given by others and Joseph Smith himself during that time. The author took care to research heavily into what life would have been like during the early 1800's in New York, Ohio, Missouri, Illinois, etc. and recounts the historical events in the form of a story. For this reason it was a very easy read, and at times even humorous in the hway its recounted which made it enjoyable.

The book gave me an appreciation for the persecution and trials that early Mormon's went through, especially the treatment they received when trying to settle peacefully in Missouri, and how the mobs were relentless in their criminal behavior toward these people who wanted only to practice their religion in peace. Their towns were pillaged and burned, some Mormons were massacred (most egregiously at Haun's Mill), other horrific crimes were committed against men and women alike. It amazed me that american citizens were allowed to be persecuted like this on the basis of their religion in this country, but then again, similar atrocities and worse were of course committed toward the slaves during this time, so I supposed it shouldn't be that unbelievable.

Members of the Mormon church will gain a new appreciation for their heritage and the trials experienced by early members. Those who aren't members or who aren't familiar with the history of Mormonism will notice that the author is a member of the Mormon faith and tells his story in such a way that is very positive toward the early leaders of the church; but also is not shy about discussing struggles, rebellions from within, criticisms and arguments made by enemies of the church, etc.

Overall a great read (or listen), I didn't want to turn it off.

Warning- the only bad thing is that I almost had to remove a star because the end of the book stopped so abruptly and without enough closure, followed by an Epilogue with a nasty twist that I really didn't like and didn't think was necessary. I did like the book, just wish I didn't read the epilogue!

Vert good if you understand what you are getting

This is not a biography of Joseph Smith but rather a series of journal entries from a fictitious character who is an early convert to Mormonism. This character takes the listener through the process of his conversion, his gathering to Zion in Kirtland, Missouri, and Nauvoo and the persecutions and troubles of those time periods. The character interacts with Joseph Smith along the way but this is not a book about Joseph Smith per se. As a convert, the character portrays the events through the lens of a believer though the author includes the other side of the story via apostates or the main character's own internal debates as events unfold.

I found the book entertaining and a worthwhile listen because I understood what the book was before I started. In that regard, the title of the book is misleading. The author's portrayal of historical events were accurate and his writing style was very appropriate to the time period and kept me engaged. If you are interested in learning more about the early history of the LDS Church in an entertaining way then you will enjoy this book.

I will not spoil the ending but there is a twist at the end that some reviewers did not like. Though I knew something was coming, the twist caught me by complete surprise and I thought that it was an incredible move by the author (in a good way). It proved to me that the author was out to write a great book and not just follow a traditional script.

If they are interested in the life of Joseph Smith but are bored by your run-of-the-mill biography, then yes.

I liked that Hemingway included a story line. Joseph Smith's biography was, in a way, snuck into the story.

Payne's voice is a bit theatrical for my taste. At first, I thought I wouldn't finish the book but I got over it and am enjoying it now. With Hemingways extensive detail and Payne's deep voice, it is easy to zone out. I found myself skipping back regularly.

I LISTENED TO IT ONCE, DIDN'T CARE FOR IT MUCH, THEN BY ACCIDENT IT STARTED AGAIN ON MY IPOD, (LIKE A YEAR LATER) AND I GOT CAUGHT UP IN IT.
PUT MYSELF IN THE HISTORY OF LIVING THERE AND GOING THOUGH THE
WHAT THEY DID. THE AUTHOR AND NARRATOR WAS SO GOOD, IT WAS EASY TO UNDERSTAND AND PUT YOUR HEART INTO THEIR BELIEFS AND HARDSHIPS.
LOVE IT AND GOING TO LISTEN TO IT RIGHT NOW TO SEE IF I MISS ANYTHING AT THE END. THE END WAS THE MOST SURPRISING TO ME. NEED TO LISTEN AND UNDERSTAND THAT PART AGAIN.

A MUST READ LDS BOOK!

What made the experience of listening to Joseph Smith the most enjoyable?

THE ENTIRE BOOK IS INCREDIBLE! A MUST READ! NARRATOR DID A SUPER JOB!!

JOSEPH SMITH AND HIS FAITHFULL FOLLOWERS AND EVEN IN THE SAD TIMES THEY GIVE THANKS TO GOD! IT HAS TAUGHT ME SO VERY MUCH! ALL THE TRIALS AND TRIBULATIONS AND MISSONS THEY SERVED, TEACHING THE GOSPEL! IT MADE ME CRY DUE TO THE MOBS WHO PERSECUTED THE MORMONS, AND HAVING TO CONSTANTLY KEEP LEAVING THERE HOMES TO MOVE. ALL THE PPL WHO LOST THERE LIVES! THANK YOU FOR SUCH A WONDERFUL BOOK! ONE OF MY FAVORITES!

This book is very greatly strongly recommend that you have to read it completely through, the truths are Heavenly Fathers testimony given to us who have asked with real intent!! 💘 I love the gospel,my testimony is strong, even in my weakness, and the book is suspenseful and hard to leave alone. A must read to the end!!!!💘💘💘💘💘

Excellent and accurate dramatisation of the life of Joseph Smith. Gripping from the first to the last.
Speaking as a Mormon myself I have to say that it really brings the history of the prophet Joseph Smith to life.
Well worth a read.