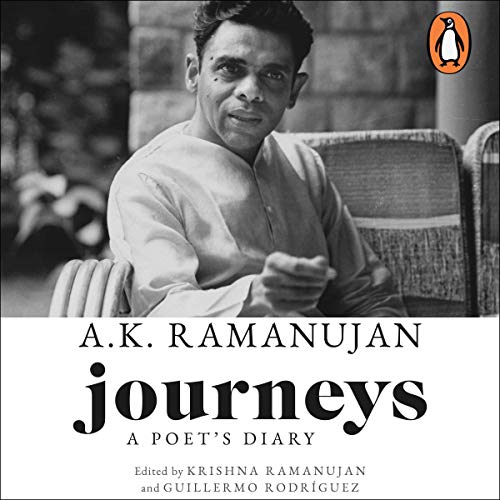 A.K. Ramanujan (1929-1993), one of India's finest poets, translators, folklorists, essayists and scholars of the 20th century, is a stalwart in India's literary history. His translations of ancient Tamil and medieval Kannada poetry, as well as of UR Ananthamurthy's novel Samskara, are considered as classics in Indian literatA pioneering modernist poet, during his lifetime he produced four poetry collections in English, and he had also intended to publish the journals he had kept throughout the decades.

After his premature death 25 years ago, his journals, diaries, papers and other documents - spanning 50 years from 1944 to 1993 - were given by his family to the Special Collections Research Center at the Regenstein Library of the University of Chicago in June 1994. These unpublished writings, meticulously preserved and catalogued at the University of Chicago, were waiting for someone to unveil them to a wider readership.

Edited by Krishna Ramanujan and Guillermo Rodríguez, Journeys offers access to Ramanujan's personal diaries and journals, providing a window into his creative process. It will include literary entries from his travels, his thoughts on writing, poetry drafts, and dreams. His diaries and journals served as fertile ground where he planted the seeds for much of his published work.

Ramanujan was the archetypal teacher and I met him at the right age. I was 17 and a student of mathematics in Dharwar while he was 10 years older, a junior lecturer in English in Belgaum nearly forty miles away....From our first meeting I was intrigued by this [...] delicate man with a high-pitched voice, and a slender sensitive forefinger, with which he punched or underlined the important points he wished to drive home [...] What was fascinating was the number of subjects on which he could hold forth with insight and scintillating wit: proverbs, riddles, conjuring tricks, mathematical puzzles, folktales' (Girish Karnad)

What listeners say about Journeys