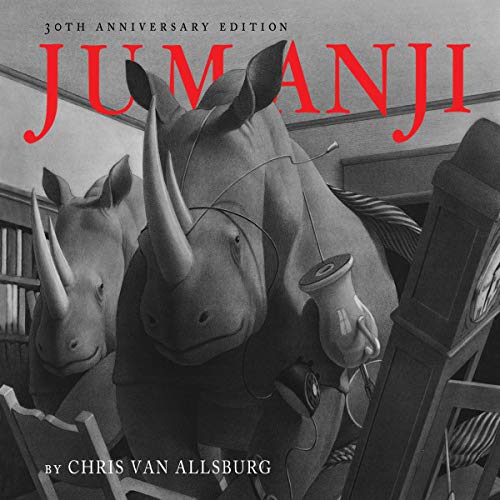 Written by: Chris Van Allsburg
Narrated by: An Ensemble Cast
Free with trial

The game under the tree looked like a hundred others Peters and Judy had at home. But they were bored and restless and, looking for something interesting to do, thought they'd give Jumanji a try. Little did they know when they unfolded its ordinary-looking playing board that they were about to be plunged into the most exciting and bizarre adventure of their lives.

Since its original publication, Jumanji has been honored with many awards, including the Caldecott Medal and a National Book Award nomination, and, in 1996, the surreal story was adapted for the big screen, followed by a 2017 sequel.

What listeners say about Jumanji

What a waste of my audible credit. This is only 15 min long. Very disappointing. The story is great, but it finishes way too soon!

This was a first listen for my young nephew. It was short enough for him to understand and to enjoy. His favorite part was the monkeys in the refrigerator.

The best classic book ever been told and the movies were better than I thought ?!

Very disappointed, what a waste of an Apple credit. The book is only 15 minutes.

This book was a cop out . Waste of a credit I was actually expecting this to be a little bit more violent scene is how it is a novel and not the movie

A bit too short but a fun story - may be good for kids bedtime story.