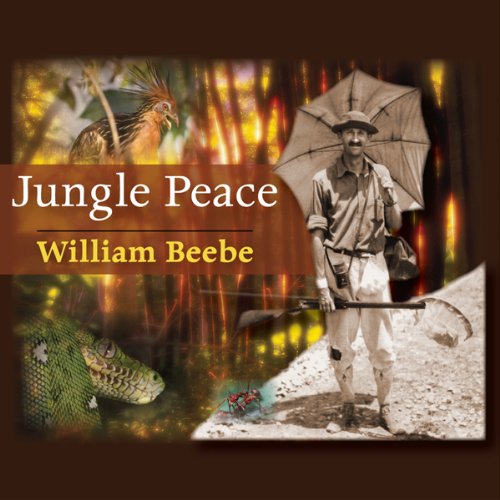 Explorer and gifted writer, William Beebe escapes from the violence of World War 1 into the jungle of British Guiana. As a naturalist, ornithologist, marine biologist, entomologist, he finds in the jungle a different kind of violence provided by nature. Beebe's curiosity, patience and powers of observation focus on and magnify nature’s raw details revealing the huge drama being played out in the tropical jungle. From, his adventures aboard ship, the Hoatzin, a rare bird that never leaves home, hordes of Army Ants on the attack, a snakes crawling at night, the Hindu immigrants who work the plantations, the building of a new road by convicts, Beebe colorfully describes a true adventure observing nature.

William Beebe is one of the founders of the field of ecology and an early advocate for conservation. When wrote Jungle Peace, he was the curator of Birds at New York Zoological Park and was director of the Tropical Research Station. Some years later, he was the first biologist to observe deepsea life in the original underwater Bathysphere. There are 11 chapters in Jungle Peace, plus an enthusiastic Review by Theodore Roosevelt."

What listeners say about Jungle Peace