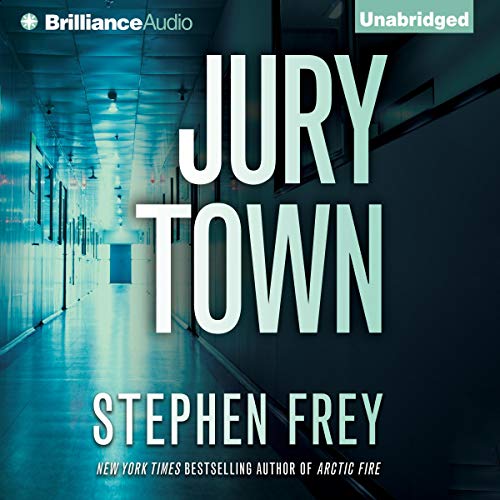 Two Hundred Jurors Completely Isolated from Society - Can Their Impartiality Lead to Justice?

Even the most incorruptible juror can be unwittingly influenced by others' opinions in the digital age, but more sinister forces are at work: Jury tampering has reached all-time highs. Unexpected verdicts are coming down more and more often, indicating that shadowy groups may be blackmailing jurors - and leaving the American justice system in shambles. Is impartiality even possible anymore?

Victoria Lewis, former governor of Virginia, thinks it is - and she has a plan to fix the broken system. Her home state is about to select 200 citizens to become full-time jurors. Those chosen will live in a refurbished prison for two years, where they'll be completely isolated from society and protected from all outside influences.

But someone always finds a way to cheat the system. And when a deadly political conspiracy reveals corruption that poisons even the highest echelons of government, everything Victoria has created stands on the brink of destruction. Can she protect the jurors, the justice system - or even herself?

What listeners say about Jury Town

Not the Good Listen I Had Hoped.

This one missed the mark for me. From the beginning, it seemed poorly contrived and grossly over-written. And then things got worse. And worse. Perhaps had this been labeled sci-fi, I could have accepted things as they were: the commonwealth of Virginia allowing its Supreme Court to covertly select permanent jurors who would be paid $1m a year and required to live sequestered for that year in a converted state prison. This was ostensibly undertaken to quell jury tampering, something that had supposedly led to the imprisonment of the former governor's father when she was a child. Meanwhile, jury tampering was unabated. But the concept just never clicked. Not my cup of tea, sad to report!

I loved this book. The narration was great and the story moved along well. Good listen.

If you enjoy a well written suspense that you can sink your teeth into, this book is for you. If you like a well performed story, you will like this book.

What an imagination this author has!! Paying jurors, and sequestering them while they are in service....hmmm! But what a fun listen! On two separate occasions, I waited in my car to hear the end of a chapter...it was that interesting! &quot;Audible 20 review sweepstakes entry&quot;

I really enjoyed the book. It held my attention tion the whole way through. I look forward to reading more of his books

I loved the premise of this story.

The story line itself is different, inspired and fresh. The concept of professional jurors as an attempt to battle corruption and tampering was fun to watch build.

There are layers of subplots in this one and our Author does a great job of keeping them all cohesive, cleaning them up and bringing them home all tied up in a bow at the end while leaving readers with just enough remaining questions to think there might be room for at least one more book.

While I enjoyed the story, the narration fell flat for me. I hung in there only because I'm too visually impaired to ditch the audiobook and swap over to the ebook but I've no doubt at all that reading this one should be exponentially more pleasant.

In books that are this current, there just isn't any excuse for mediocre to poor narration. The proverbial bars were raised, envelopes pushed, boxes broken and thought outside of such a very long time ago. Good narrators are basically voice actors in addition to the many other hats that they wear.

This just pretty okay audiobook should have been excellent. The author is well seasoned and I found the story lacking not at all but for this painfully flat narration. There was little inflection. I could barely identify some character changes but for context, not even gender changes. It was just difficult to navigate.

Those of us who truly rely on narration due to various disabilities live in a world where a beautifully produced audiobook is everything. For a little while, it puts us into a space that isn't really attainable through other methods. When it is disappointing, it is very much so.

I'll give this book a C but it should have been an A, truly.

Loved the story from beginning to end

Totally captured from the first chapter to last word. Makes you wonder about this world we live in and how much could potentially not be fiction.

The book was decent and story interesting, but the characters were difficult to follow with the narration (masculine characters were hard to differentiate). Also the story ending was a little too perfect and clean. In all entertaining but not much grabbing power as I found myself only marginally interested as the story progresses.

Not really. I know the author can do so much better. I would recommend a different one.

The concept of Jury Town was an interesting idea. The characters were not captivating.

What aspect of Emily Sutton-Smith’s performance would you have changed?

Her performance did not keep me engaged.

Did Jury Town inspire you to do anything?