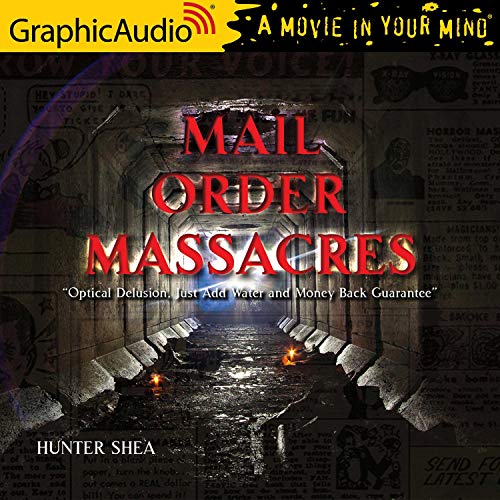 Open your eyes with “X-ray” vision!

Put on a pair of “X-Ray” glasses and things will never look the same! These almost magical specs will make you the hit of the party! Astonishing three-dimensional X-ray visions of what your friends - and girls - look like under their clothes! And all for just one dollar. After his son gives him a pair as a gift, Martin Blackstone tries them on just for the hell of it - and all they do is give him a headache...until he sees things he can’t possibly be seeing. Glimpses of things on the other side of a wall or beneath someone’s clothing. He wants to believe it’s just his overactive imagination, but the “X-ray” specs actually work. Then the fun novelty becomes a waking nightmare when the glasses burn into his face and he starts seeing horrifying apocalyptic visions no mortal man was ever meant to see. Images that alter his very personality - from a husband and father to a bloodthirsty homicidal maniac.... Because sometimes you can see too much.

It’s fun! It’s easy! They only cost $4.99. Just clip out the ad in your comic book. Then ask Mom to mail it in. A few weeks later, receive a packet of instant Sea Serpent dust. Then: Just add water...and watch them grow! Just ask David and Patrick. Their “instant pets” are instant duds. They don’t hatch, they don’t grow, they don’t do anything. So they dump them into the sewer where their dad pours toxic chemicals.... It’s been a couple days since David and Patrick thought about those Sea Serpents. But now, small animals are disappearing in the neighborhood. Strange slimy creatures are rising from the sewers. And once the screaming starts, David and Patrick realize that their childhood pets really did come to life. With a vengeance. They’re enormous...and have a ravenous hunger for human flesh....

Your money back or your life....

Protect America’s shores with your very own nuclear submarine! Constructed from durable fiberboard material, this submersible is large enough for two kids! Sail off into imaginative international intrigue for just five dollars! If this toy doesn’t float your boat, return it for a full refund! With her son’s heart set on piloting his own nuclear submarine, Rosemary Lanchester orders the craft advertised on the back of a comic book. What arrives is more substandard than submarine, but her son loves the cheap piece of cardboard. Until he and a friend nearly drown when they take the sub for a deep sea dive in the swimming pool. Enraged, Rosemary reports the toy’s manufacturer to the Better Business Bureau. The company’s customer service center retaliates with threatening phone calls. Then her son and husband mysteriously disappear. To save her family, Rosemary tracks down the company’s headquarters with the help of her brother - a survivalist with enough toys of his own to wage an all-out war. And she still wants her five dollars.