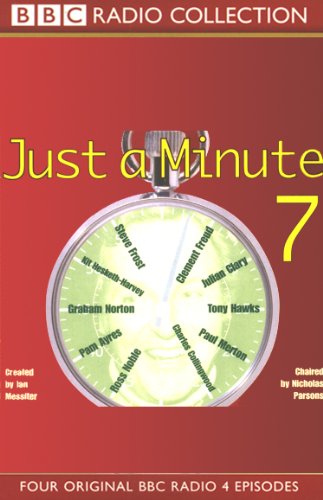 This selection of four more editions of Just a Minute includes the Sony award-winning programme from 2002, plus three from the first series of 2003. Nicholas Parsons once again attempts to keep control over the proceedings, as well as over panellists Clement Freud, Paul Merton, Tony Hawks, Julian Clary, Pam Ayres (making her debut on the show), Graham Norton, Kit Hesketh-Harvey, Ross Noble, Steve Frost, and Charles Collingwood as they pit their wits, and their words, against the clock.

As the players attempt to speak for 60 seconds without repetition, deviation, or hesitation, the subjects covered range from "The Wombles" and "Husbands" to "What Goes on Backstage" and "Flat Stomachs". Eloquence, wit, imagination, and a sharp ear are the qualities required for the game, and the hilarious results are here for all to enjoy.

What listeners say about Just a Minute 7