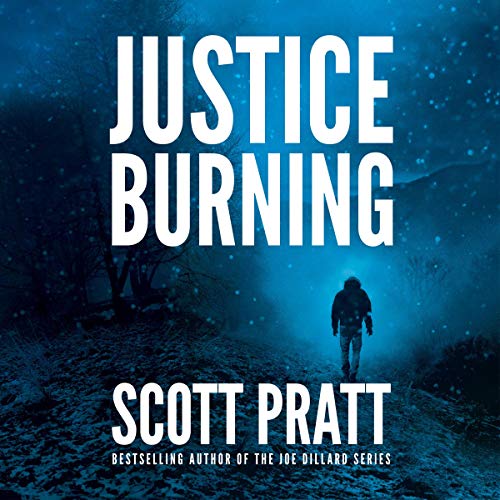 Former defense attorney Darren Street is desperately trying to put his life back together after spending two years in a maximum-security prison for a murder he didn’t commit. He’s rebuilding his law practice, reconnecting with his son, and falling more deeply in love with his girlfriend, fellow attorney Grace Alexander. But the past casts a long shadow, and for Street, there’s no outrunning it.

Tormented by nightmares and violent mood swings, Street is seeking treatment for PTSD when a new trauma shakes his world: his mother is killed in an explosion, but the police believe Street was the intended target. Payback from an old enemy, or the calling card of a deadly new foe? Whoever’s behind it, Street begins to lose his grip on reality and decides to take matters in his own hands. And the law won’t stop him from revenge. Justice has a new name: Darren Street.

What listeners say about Justice Burning

How much havoc can one troubled lawyer cause?

In this book attorney Darren Street, now exonerated from past crimes he did not commit is out for his own justice. He's mad and rightfully so, first he was framed then his mother's house is bombed and she it killed in the explosion. He was supposed to be there.
The prologue of this book begins with Street killing the two men responsible for his mother's death in a secluded bar.
It seems the only one there for him is his former cell mate. His fiancé gives him the boot and now he's really alone.
So Street is now a suspect in 2 murders and a disappearance and he has two officers hot on his tail. No proof but lots of suspicion.
This character is the black sheep to Scott Pratt's Joe Dillard series. Although understandable this lawyer has become a vigilante.
James Patrick Cronin does a great job narrating.
Good fast paced read.
HIGHLY RECOMMENDED.
If you found this review helpful please indicate so.
Thank You.

Justice Has A New Name - Don't Mess With My Mama!!

This is a great story. Darren Street has been to hell and back. He has spent two years in a maximum-security prison for a murder he didn't commit. Now he's trying to put his life back together when his mother is killed in an explosion, the police believed but Street knew that he was the intended target. Street began to lose his grip on reality and decided to take matters into his own hands. Nothing including the law will stop him from extracting revenge. Payback is a bitch, and Street is the new sheriff in town. Darren Street is a force to be reckoned with!! A good fast-paced read.

The publisher's summary is a good synopsis of this story which I thoroughly enjoyed. I was really afraid that Street had lost his grip on reality, and had crossed over into the dark side forever. Had a decent guy turned into a psychotic killer? I hope there is another story in this series.

I read book one of this trilogy in 2015, but for some reason or other I just got around to reading book two.

The book is well written. The story is set in Knoxville, TN. Our protagonist is trying to put his life back together after serving two years for a crime he did not comment. He is back to being a defense attorney. He is a very angry man. The plot is interesting, the pace is fast and there is lots of action and suspense. Morally, the story is challenging. I cannot wait to read book three to see if he gets caught or not.

The book is just over seven and a half hours. James Patrick Cronin does a great job narrating the book. Cronin is an Earphone Award winner and was nominated for the Audie Award. He has an easy- to- listen- to voice.

Novel #2 in the Darren Street series

After being wrongfully convicted by a corrupt federal prosecutor in Justice Redeemed, Darren Street spent 2 years in prison before the conviction was reversed. He now has his law license restored, but then someone kills his mother by bombing her house. Street seeks retribution against the corrupt prosecutor and against the two men who killed his mother. He decides it must deliver justice extra-legally. Meanwhile, Street's wife has divorced him and is using the legal system to minimize his time with his son. Any stability in Street's life is provided by his relationship with Grace, his girlfriend, who is the most likable person in the novel.

I prefer author Scott Pratt's eight novel Joe Dillard legal thriller series to the Darren Street series, but both are outstanding. Both series are set in eastern Tennessee. I strongly recommend Justice Burning and the other nine Scott Pratt legal thrillers. Pratt's one excursion from legal thrillers is titled River of Fire. I definitely do not recommend it.

Darren Street Loses His Way But Find It Again

Darren Street, Criminal Defense Attorney, Former prison inmate railroaded by corrupt district attorney, and loving son, loses his way. You ask how can a criminal defense attorney do some of the things Darren does? Well, he went through a lot and is doesn't trust much. Can you blame him? This is not your usual attorney book. It is dark and tragic and you don't know whether to root for Darren or condemn him. It is well written and Pappy Donovan shows us who he really is. Inspector Grimes is totally dedicated but yet I was pulling for him to lose. This is an excellent book and I was sorry to see it end BUT if it hadn't ended soon, I was going to read the last chapter so I'd know what happened. I listened to the book on audible and the narrator James Patrick Cronin was superb. Fortunately, I had the book on my kindle so I was able to finish reading it and didn't need to skip to the end. The book wrapped up with Darren still intact. We know this because there is a Book 3.

Could not put it down. This book is so different from the Dylan series, but still good. Made me root for the bad guy.
Twist and turns throughout the book.

I really do love this series! It is a page turning awesome series. Can't stop listening to them.

The story is amazing! Things are happening all the time. There are bad people, and some people just need killin. LOL

If you haven't read this series I totally recommend it! Just do it.

As for the narration, its great. Very enjoyable listen. James Patrick Cronin does a great job on all the voices.

Read this series people! Its great.

Darren Street, in book 1, was a believable, likable, vulnerable guy. But in this book his character and personality took a complete turn, and he is more of a sociopath . It’s not plausible to have a character change so much, even factoring in all the trauma he experienced in prison.

This Darren Street really sucked. I almost didn’t finish the book because he put me off so much. Will try book 3, if there’s one, and hope that Darren has gotten some redemption.

I read the first book in the Darren Street series and even though it wasn’t particularly interesting it was at least a decent tale of a man “wronged” and eventual justice. This second book is just completely pointless. It undoes every plot and character development in the first book and is just Darren, the unlikeable protagonist, carrying out one dumb and selfish action after another. Do not waste your time with this.

story was good but changing the narrator wasn't a good idea. I didn't enjoy this as much as the 1st book but still good

Darren Street strikes again, this story shows how life can spiral out of control when some one is pushed to the edge when bad things happen to them. This happens to Darren and we see him visit a very dark place and things do not go as planned and we find out how he gets through it and will he redeem himself in the next book, I just have to know.

This novel was very disappointing. It didn't have the pace and the intrigue of its predecessor. I found it very slow and complicated and bogged down, and not interesting at all. There is one final book to read to complete this series, I’m hoping that it restores the original pace, verve and intrigue of the first.

The narrator is excellent though.

I loved the first book in this series, but it has now degenerated into a violent killing fest. Grace is the only pleasant character. If you upset him he kills you. That’s about the plot. I returned it and won’t return to this series.