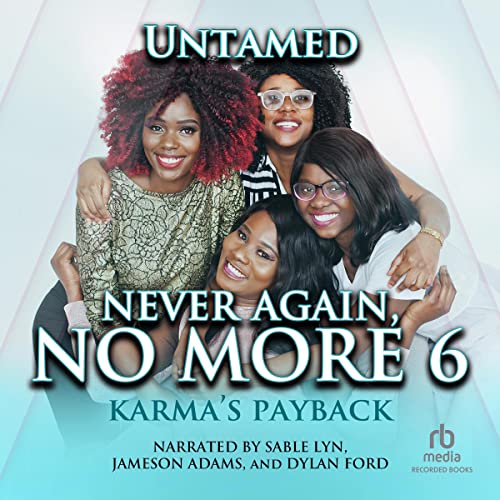 In part 6, the final chapter of the Never Again, No More series, the lives of all the men and women are forever changed as they are forced to come to terms with the consequences of their actions. And one thing is for sure: none of them will ever be the same again.

LaMeka and Gavin have a love so pure that it could only be ordained by God, but devilish intentions lurk in the shadows, and it’s a lot closer to home than LaMeka thinks. Will the evil intentions of others be the final breaking point of their relationship?

Despite Lucinda’s ultimate betrayal, she isn’t the only one feasting on forbidden fruit. Love still brews under the surface, but will it be enough to overcome the extreme perils of their sordid love affair, or could the hurt they’ve caused one another prove to be the final straw?

Although Terrence’s life was spared, the events have changed the man that Trinity once knew and loved. For Terrence, it isn’t the circumstances that changed him; it’s Trinity’s actions. Will her decisions cause a permanent rift between these lifetime lovers?

As Charice battles her indecisiveness, Ryan and Lincoln may have sealed her fate for her. As she comes to grips with what she wants, the final decision may no longer be hers to make.

What listeners say about Karma's Payback

Love, Love, Loved This series. All the drama and the payback. I’m ready to begin again.

Enjoyed reading thr 6 editions of this book. It was interesting from beginning to end, very intriguing and detailed. The people reading to us were outstanding. I absolutely enjoyed this book and would recommend it to everyone

Perfect ending to a series

Untamed killed it, per usual. I was sad that this would be last in series but was very excited at the end. They way everything was unfolding had me going crazy in my car. It was so exciting yet I hated for it to end, it took me three days to listen to the last two chapters because I wasn’t ready. I’m hoping now pooch will have a story and we will get a little more…..

Loved book 6 so happy how the end ended the whole series was incredible. Hope there is another series like this one in the works.

I love these characters and there friendships. I really hope it more coming because there is so much more story to tell……