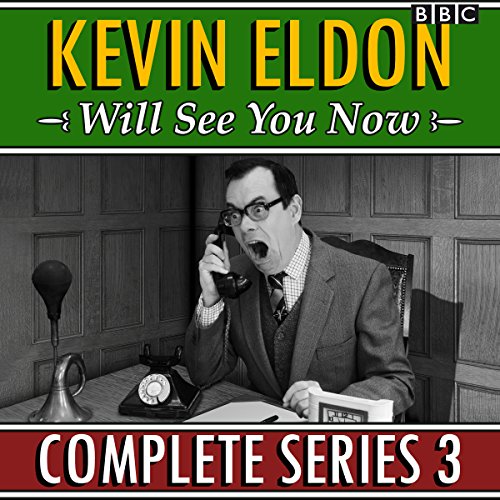 The third series of the award-winning show. Kevin Eldon is a comedy phenomenon. He's been in virtually every major comedy show in the last 15 years, but not content with working with the likes of Chris Morris, Steve Coogan, Armando Iannucci, Harry Enfield & Paul Whitehouse, Stewart Lee, Julia Davis and Graham Linehan, he's also created his own comedy series for BBC Radio 4.

In the first episode, more thrilling adventures of Commander Topper Hargreaves and his faithful dog Duke, a sneak preview of a new opera with extra wine gums, and, of course, some vitreous castanets.

In show two, a love song, a dead scarecrow, a Jiffy Bag and Kylie Minogue. Some owls were harmed during the making of this programme.

Show three, and Kevin Eldon and his all-important cast return with sketches about bunnies, Beethoven, Dylan Thomas and olives. Plus, we finally discover a use for avant-garde German film director Werner Herzog.

The fourth and final episode features the Napoleonic Wars, boiler parts and a nice rollercoaster....

The show comes from Pozzitive, proud producers of Cabin Pressure, Thanks A Lot, Milton Jones!, Jeremy Hardy Speaks To The Nation, The Brig Society, The Castle, Armando Iannucci's Charm Offensive & Kevin Eldon Will See You Now....

What listeners say about Kevin Eldon Will See You Now: Series 3

Kevin Eldon might not be a big name, but if you scan the credits to comedy shows from the last 15 years ago, his name will crop quite often. His a very clever, well observed comedy and the surrealistic capabilities of radio are perfect for his razor sharp wit and skill. Anybody who is thinking about buying this, and series 1 and 2, I would say DO IT!!!

Kevin Eldon does not entertain - he beguiles, bewilders, bludgeons and beautifully explores the full potential for; Auditory - Comedic - Exposition - quite simply the guy is ACE.

I sat on the Chuo line, in Tokyo, intending to travel three stops and ended up staying on for over an hour, then an hour back to my original destination ! ...just to stay tuned into the show. Crying with laughter and shaking with joy. Fellow early morning Sunday passengers looked on with concern, the naturally reserved Japanese unable to bring themselves to engage with the bizarrely guffawing gaijin.

The concept, technical precision and the sheer genius comedy of series 1 and 2 has once again moved up a step.

Why Kevin Eldon is not celebrated for the comedic genius he is ... is simply beyond me.

Echoes of the finer moments of Spike Milligan, Tony Hancock, Marty Feldman, Barry Took, Eddie Braben, Kenny Everett, Stuart Lee, Milton Jones, Frankie Boyle - but all jiggled together in a delicious comedy stew, simmered to perfection in the spirit of Dirk Maggs - With a supporting cast of actors who are as perfect a combination as you can get... and the guy can sing as well !!