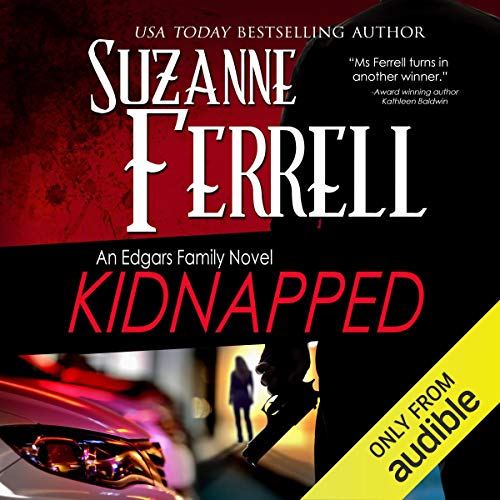 Book One in the Edgars Family Romantic Suspense Novels

A Man in Desperate Need

FBI Agent Jake Carlisle is in deep trouble. While undercover he's been shot, but he's not sure if it's the crooks or local cops behind it. Worse, if he can't get help fast, two lives will be lost - his and that of the young witness, a boy whom he's sworn to protect. On the run from both the police and the Russian Mafia, Jake will do anything to save the child at his side, even something illegal. In desperation he kidnaps a nurse from a hospital parking lot.

A Woman at the Edge of Despair

ER nurse Samantha Edgars has been living in an emotional vacuum since the death of her daughter. Abandoned by her husband not long afterward, she struggles just to get through each day, but now all she wants is for the pain to stop and to finally be at peace with her child. Mentally and physically exhausted following a difficult shift, she walks through the hospital's dark parking lot lost in her own thoughts. Suddenly she's jolted from her stupor when she's bound, gagged, and tossed into the back of her car.

Danger on Their Heels

When they arrive at her home, she's terrified and forced to tend to a bleeding FBI agent and his injured witness. But Samantha quickly learns the rogue agent and orphaned boy need more than just her professional skills. With a menace bearing down on them, she must learn to trust Jake - and her heart - if they're all going to survive.

This was a fun and exciting read. Yeah, Sami had some pretty stupid thoughts of attraction to her kidnapper, Jake, but her arguments with herself over them were kinda funny. LOL, especially when she called it Amsterdam Syndrome instead of Stockholm and her inner self corrected her. None of the 1 and 2 star reviews bothered to tell you about that, did they? Oh well, we all know how reviews go.

By page 170 I was still really interested in the story, Sami’s brothers Luke and Matt just left Jake, Sami’s and Nicky’s hideout with their plan all put together so I knew things were about to get exciting. Excited to see what misery was going to come down on Petrov and the rest of the Russian mob. Personally, I wanted them all dead, after how they’d tortured Nicky! Geez, he’s just a little boy, 9 if I remember correctly, but Sami had a hard time guessing his age because he was so small and malnourished.

Overall, this was a terrific read, even though a little wordy, with kidnapping, murder, torture, sex and love. You really can’t ask for more than that. Yeah, they fell in love quickly but you have to remember that the whole story was only a matter of days, not weeks or months. Jake had to hurry and clear his name and find the real bad guy, the one pulling the strings, so everything was hurried. And even though they were attracted to each other right off the bat they didn’t have sex until 40% of the book. It’s not like they did it the minute she came to. Geez!

I did think the author kind of went overboard with Sami’s grief over Aimee. I mean she had 3 prescriptions for sleeping pills that she thought about taking? Aimee had been dead for 4 years so why was she having stupid thoughts now? A few months, a year, maybe! But not 4 years. She was a nurse, for Pete’s sake. Also, the italic conversations with her daughter when she was alive were a little too much. I definitely skimmed those.

AND I have to admit I did skim quite a bit. There was just sooo much crap I just couldn’t read. I had to get to the good stuff. As much as I like romance when a story is exciting I want to get to it and leave so much romance and stuff behind. When they’re running for their lives I don’t want to read about how sexy Jake is or how he wants to make love to her again. Or how Jake makes Sami feel so safe and loved, but does he care at all for her? Will he leave when this case is over? Enough! Just get on with it. That’s just filler and I hate filler. This book had 373 pages and that wasn’t necessary. The other books in this series have as many or more pages as this one so I can’t see myself spending $6 on books I’m going to skim.

There was sexual attraction all through the book and a couple of nicely written bedroom scenes.

There was swearing and the F-bomb was released only 3 times.

As to the narrator: Paul Boehmer was pretty good through the entire book. He laughed, whispered, yelled, whatever the book called for. His voice for Sami was a little deep but not too awfully bad, but it could have been better. He read with a lot of emotion. I would definitely listen to him again.

The story was good but it was difficult to get into at the beginning, due to the odd way the narrator spoke. He has a good voice but often spoke so stilted that it was almost mechanical. Eventually you get used to it and can just enjoy the story.

I only got through half of this book. I almost completely stopped listening when our fearless "hero" admitted that he had used some of the prostitutes in the employ of main bad guy to keep his cover. This was after noting that the main bad guy was a sex trafficker. That means that he, in essence, used women that were being held against their will for sex to keep his cover. Undercover agents rarely go that far into illegal territory to keep a cover. Not ones with even the tiniest bit of conscience that is. I didn't believe things from our heroine's point of view either. The man that had kidnapped her was threatening and cruel and yet she had the hots for him? What? What kind of twisted, toxic relationship was she used to. So, unfortunately, this was a no for me.

A Romantic Thriller With a Touch of Good Luck

What did you love best about Kidnapped?

What did I love about the book? Well, I was in tune with the 'thriller' aspect of the book than the romantic side of the book... though I won't deny that the romance made the book more ... sentimental than anything else.

This book is definitely a romance type of book rather than a thriller. Yes, there is a mystery/cops/action and the like... but the romantic scenes pretty much started in the first chapter or two. If you like a romantic thriller -heavy on the romance-, then this is the book for you.

I was looking for more of the 'thriller' aspect of the story line and not the romance side of the story, but I still love the book. It is very well written, it is a fast paced book, and the characters were well developed.

Personally, I do love the child who is a prominent part of the story; he is the one who brings the two prominent adults in the story together. If it had not been for the child, they would have never met, fallen in love, and gotten married.

That is probably my favorite aspect of the story.

My favorite scene came towards the end of the book, when Samantha and Jake are talking with the district attorney about how to handle the press and getting what Samantha, Jake, and the young boy want they want ... no, not what they *want*, but what they *need*.

Samantha was quick to defend Jake, about how he saved both her and the young boy... and that Jake should not be charged at all for his actions in protecting the child. Jake settled her to some extent before he told his side of the story, and came to an understanding with the district attorney.

Jake would willingly help deal with the press if the district attorney gave Samantha custody to the child, adopt the child, and then let Jake himself marry Samantha. It would mean that the three of them would become a bog, happy family.

Yes. While I didn't particularly want as much romance as what there was, the romance theme provided a different outlook for the characters than what could have been...

Just a quick note... this story does mention the death of a child (Samantha's daughter, and she died of cancer), depression, and suicidal intentions (that never came to fruition).

So yeah .. this happened ..
I wanted to read a romantic suspense to keep me at the edge of my seat and to feel for the characters so deep that I want to heart my heart breaking .. sadly this book provided nothing of my expectations, the story is so rushed and the chemistry is so weird and everything was just a jumble mess!
So the story is about Jake who is an FBI agent trying to rescue a kid from the mafia and one day he got shot and he is forced to kidnap a nurse " Samantha" to patch him up, and the story picks up from there
The relationship screams Stockholm Syndrome, and I don't like that through every cruel thing Jake did we will have to forgive him because he is the main love interest in the story .. hope the next book is better

The narrator tried his best to perform each sound differently and he done a decent job, but not the best I heard

Suzanne Ferrell is one of my fav authors.. loved this series so much it is on my re-reads list!!

This was a really good action packed book. There was also romance and detectives at work around every corner.

The plot of the book was good, it was well read, and it was one of the few books that kept me guessing until the end. (Which is hard to do.) My only complaint is how graphic the sex scenes were...you can get the idea without the whole scene being described.

I enjoyed the book for the most part, even though there were times when I was very frustrated with Sammie’s blunders.

a book worth reading

The author putts a little to much into the romance which makes that aspect of the book rather corny. The mystery and thriller aspects were excellent.