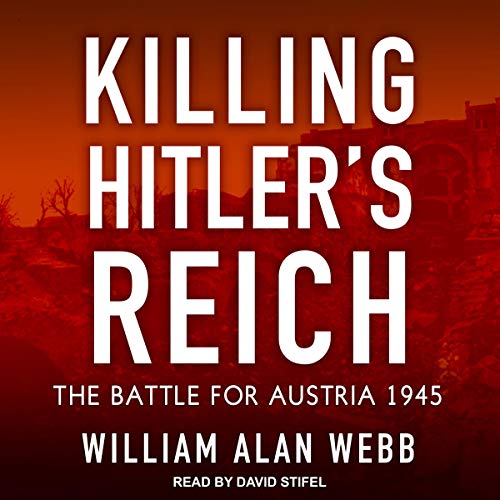 Austria's fate held major ramifications for postwar Europe and the entire free world, yet there is no complete account of the campaign written in English. Given the scale of the fighting and the scope of the consequences, this book fills a major gap in the literature of World War Two.

On VE Day Army Group South listed 450,000 men still under arms in four armies. It was this massive force that made General Dwight Eisenhower change the entire focus of American ground operations to cut off Germans from retreating into the National Redoubt.

Moreover, it was Austria not Berlin, that proved to be the graveyard of the Waffen SS. No less than fifteen of Himmler's divisions ended the war there.

And as the German war effort disintegrated into chaos, high ranking Nazis fled the dying Reich through Austria and into Italy. Some made it, many didn't. Killing Hitler's Reich follows the chase and capture of some of the most notorious, such as Himmler's Second in Command, Ernst Kaltenbrunner.

finally a history of the war in austria

I did not expect such a detailed and accurate account of the conquest of what used to be called the >ostmark< from a fiction author. Incredibly well researched considering the few literature available on that war theatre and very accurate as far as I can judge - even the fighting in the little remote village I come from - where SS troups made a last standoff against us troops - is described. Although the author tries to keep a balanced account - an even more critical view on the ss madmen would probably not have hurt.. implaccable narration

The amount of detail provided by the author allows a reader to trace the war in Austria on maps. And it gives us an extensive account of how bitter the battles in Austria were for the control of the country. It is fortunate that Eisenhower sent the American army and Austria and also the British army as well.

A day by day, unit by unit recount of the last 5.5 weeks of WW II in Austria. The sheer immense amount of research behind this is absolutely astounding. No military history or WW2 buff should miss this.

The author is quick to point out Soviet atrocities which is fine if he did the same for the Waffen SS. His portrayal of some of the most murderous military units in history is unfortunately very sugar coated. The author portrays them as brave soldiers merely fighting for survival against a vast Soviet horde. Why the Soviets were invading and what the SS men were doing in Russia the last 3 years was apparently not worth mentioning.

I was really looking forward to listening to this as in is a part of WWII that I am not familiar with. The introductions were okay but once starting the first chapter, which is over 4 hours in length, I started to struggle. It details the movements of the various individual divisions, using full German unit names. I found this difficult to keep track of, plus it also details equipment types and their movements which together made it too technically detailed for me to enjoy. The unit names incorporate lots of German language designations but the narrator's pronunciation was way off, to the point it was swinging between being a bit irritating to just nonsensical. So I gave up and returned the book. I think this book is probably better suited to reading than listening.