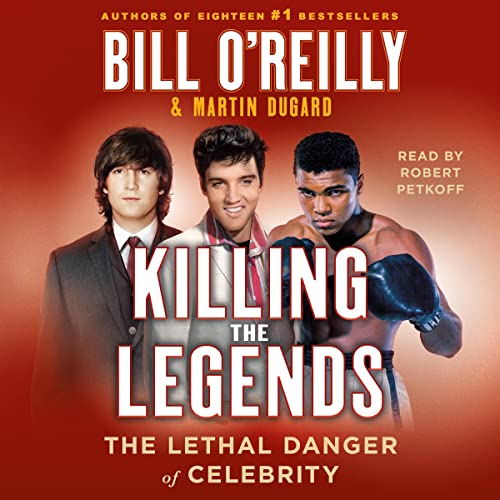 In the latest audiobook in the multimillion-selling Killing Series, Bill O'Reilly and Martin Dugard tell the larger-than-life stories of Elvis Presley, John Lennon, and Muhammad Ali.

The King is dead. The Walrus is shot. The Greatest is no more.

Elvis Presley, John Lennon, and Muhammad Ali. These three icons changed not only the worlds of music, film, and sports, but the world itself. Their faces were known everywhere, in every nation, across every culture. And their stories became larger than life—until their lives spun out of control at the hands of those they most trusted.

In Killing the Legends, Bill O’Reilly and Martin Dugard explore the lives, legacies, and tragic deaths of three of the most famous people of the 20th century. Each experienced immense success, then failures that forced them to change; each faced the challenge of growing old in fields that privilege youth; and finally, each became isolated, cocooned by wealth but vulnerable to the demands of those in their innermost circles.

Dramatic, insightful, and immensely entertaining, Killing the Legends is the twelfth title in O’Reilly and Dugard’s Killing series: the most popular series of narrative history in the world, with more than 18 million copies in print.

What listeners say about Killing the Legends

whereas this book detailed the 3 celebrity histories well, it made no attempt to draw similarities between them, factors that lead to so many premature deaths among high profile people, or the psychosocial underpinnings that lead to this kind of long term destructive behavior. Yes there are some long lived celebrities like McCartney, Jagger, Elton John, etc. What do they do that the others do not. it's too simple to say drugs, alcohol. I was waiting for the book to address this but it never did. Who wants to be famous or rich if it kills you?

Good Facts. Well read, but would have been nice to hear the Author.

Really a fun listen. Most of the info we’ve heard before, but SOME new stuff sprinkled in there. Although the Narrator did an EXCELLENT job, for a book like this, it would have been a better choice to have the author, Bill O’Reilly, do the read. His name is why we buy the book. It’s Mr O’Reilly we hear do the interviews ABOUT the book. It comes off as a little less important to not have him do the Narration. Otherwise, still a fun listen.

Another GREAT in the Killing series

Really look forward to these books. Already can’t wait to see what’s next! Hopefully it will be soon.

When I downloaded this VERY early this am it showed zero downloads so I must have been one of the first. Been down and put for a week so already finished it. Learned a lot of details I never knew. Top 5 Killing Book.

Once again, the story and history does not let the reader down. Like the other books in the series I learned so much.

Zipped thru this in 1 1/2 days!! very interesting and informative. Anxious to read more of their collaborations.

I learned so much
I highly recommend it. Mr. O’Reilly and Mr. Dugard do a great job in this book.

Good lessons about knowing your "friends"...and watching your money. Very sad in every case presented.

Seemed more akin to tabloid writings. I have really enjoyed the Killing series but this one I did not. Lacked depth but heavy on the sensational again and again and again..... Excellent narration though.

I have read most of the Killing Series, and this one does not disappoint. I love the work and research.

A punchy breakdown of the lives of three men who were as troubled as they were successful. Moved at a brisk pace and keeps you hooked to the end.