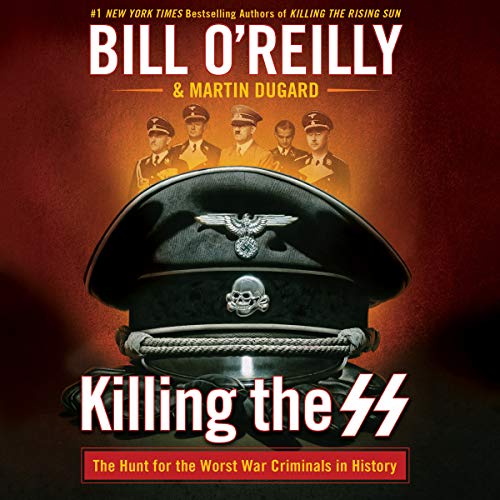 Confronting Nazi evil is the subject of the latest installment in the mega-best-selling Killing series.

As the true horrors of the Third Reich began to be exposed immediately after World War II, the Nazi war criminals who committed genocide went on the run. A few were swiftly caught, including the notorious SS leader Heinrich Himmler. Others, however, evaded capture through a sophisticated Nazi organization designed to hide them. Among those war criminals were Josef Mengele, the “Angel of Death” who performed hideous medical experiments at Auschwitz; Martin Bormann, Hitler’s brutal personal secretary; Klaus Barbie, the cruel "Butcher of Lyon"; and perhaps the most awful Nazi of all: Adolf Eichmann.

Killing the SS is the epic saga of the espionage and daring waged by self-styled "Nazi hunters". This determined and disparate group included a French husband and wife team, an American lawyer who served in the army on D-Day, a German prosecutor who had signed an oath to the Nazi Party, Israeli Mossad agents, and a death camp survivor. Over decades, these men and women scoured the world, tracking down the SS fugitives and bringing them to justice, which often meant death.

Written in the fast-paced style of the Killing series, Killing the SS will educate and stun the listener. The final chapter is truly shocking.

What listeners say about Killing the SS

I am a big fan of O’Reilly’s “Killing“ series and I have read most of them as of this writing. Also, having recently re-read William L. Shirer‘s great work “The Rise and Fall of the Third Reich“ I have been eagerly anticipating the release of this latest book. The story itself does not disappoint - it is well-researched, intriguing, and at times moving. However, while I have enjoyed O’Reilly’s narration of his past books, this attempt was embarrassingly poor. His pace was too fast, his diction bordered on drunken slurring, and most egregiously his German pronunciation was simply abominable! Further, not only did he mispronounce nearly every German word and name in the text, he couldn’t even be consistent in his errors. I am fluent in German, and if I had to listen to him pronounce the infamous Nazi death camp as “ouch-wich” or calling the Nazi party symbol a “swak-sticker” one more time, I was considering jamming an icepick in my ear just to make it stop. If O’Reilly isn’t going to approach narration of his own works in a professional manner, he needs to leave that task to someone who will.

I love the intriguing story. It kept me involved and wanting to hear more. O'Reilly's narration is excellent and his years as a broadcast journalist is evident. An easy to listen to and follow read.

Bill takes you on an in-depth journey for the hunt of some of the worlds most barbaric criminals of WW2. Highly recommended

Should Have Hired Someone Else to Read It

There were a number of points about this part of history that I was not aware of. History always fascinates me. Mr. O'Reilly should have gotten someone who understands the German Language to read this. Every pronunciation was butchered. Regardless, I do like the Killing Series of books.

After much anticipation, regrettably I was disappointed with this latest addition to a worthy series of historical narratives. Overburdened with too many details interrupting the logical flow of events, it also suffers from Bill O’Reilly‘s numerous miss-pronunciations of German words and names. One would have thought that a broadcaster of his caliber would have taken the time to learn the correct pronunciation.

Not as good as the other killing series books. Just passable. Actually boring in parts.

I really enjoyed the narrative and learned a lot. I just wish it had been read by a professional reader and then it would of gotten 5 stars from me! Fortunately, Mr. O'Reilly's reading style is not totally unbearable but occasionally gets grating with the unnatural pauses and ups and downs in his rendition; no where near the smoothness and cadence produced by professional readers. Why must authors read their own works? It very rarely works.

Good read. Contained information I did not know.

Tried and Tried but Can't finish

Bill should not be narrating books!! I usually finish a book within three days of getting one. I've tried and quit about 5 times so far with this and just can't take his style of reading. Brutal

Bill might be a fine author in his gathering of facts and reporting them, but his narration skills are painful. His pronunciation of German names and any foreign words made me wince. In my opinion, this greatly reduced the overall story and performance.

The only murder here is the German language! Some of the pronunciations are laughable; it is not a scholarly work. I had hoped that there would be more information on the less well known Nazis who “got away” but all of the information here is well known and little is added to the ongoing narrative of Nazi hunting. However, it reminds one of some of the most evil people of all time.