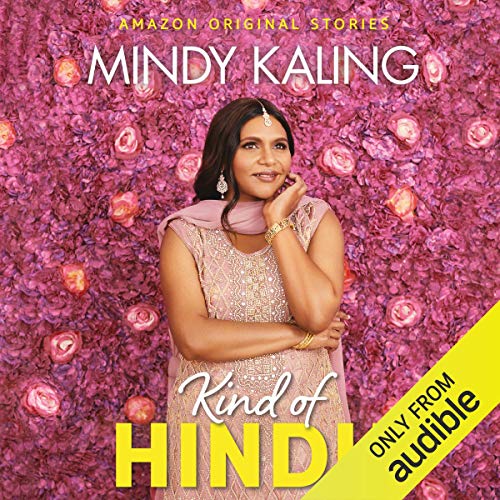 What if only kind of knowing your family’s heritage is actually kind of lame? For Mindy Kaling, the number one bestselling author of Why Not Me?, the search for an answer begins with an Edible Arrangement of chocolate-covered strawberries and a Hindu priest.

Like Kelly Kapoor on The Office, Mindy is engaged with her Indian heritage to the extent that it is fun and convenient. So apart from a tolerance for spicy foods and an appreciation for Ravi Shankar, Mindy isn’t all that Hindu. Her daughter’s Jewish godfather--TV and film’s B.J. Novak--prompts her to reconsider her religious beliefs and ask herself: How Indian do I want my daughter to be?

From the acclaimed writer, actor, director, producer, and New York Times bestselling author comes Nothing Like I Imagined. In these essays, Mindy Kaling shares the latest chapters of a multitasking life in Hollywood. Listen to them in a single sitting. They’re pitch-perfect.

What listeners say about Kind of Hindu

I enjoyed Miindy's eloquent telling of facing the challenge of raising a child in a culture that is different from her ancestral heritage. Many parents probably come to this crossroad. Her experience is a welcomed perspective of how she navigated her challenge, and resolved her concerns about her child's future upbringing.

The worst “whatever it is”I ever listened to

After 3 minutes, I stop listening to it. She sounds shallow, want to be white, but also want to be involved in her culture to appear more interesting. Okay, I probably shouldn’t write this review since I didn’t waste my time finishing it, but I couldn’t bare to listen anymore.

Thank you Mindy for helping me feel I'm not alone in going through a cultural identity struggle. Now I can be bold and own it when I say I'm kinda desi.

I am a French immigrant in the USA and I am having a daughter. I have been feeling like I want my daughter to learn French and eat the sort of French diet I have been trying to keep and all these things that are slightly different (mostly related to food) that I do and my American husband don’t.
This story is it. I want my daughter to feel a sense of belonging to France, like I do.
Thank you ❤️

I have always described myself as the worst Catholic, but Mindy has helped me realizing that I’m “kind of” Catholic so that I’m never really alone after my mom died when I was 13. I love Mindy’s wit. Can’t wait to hear the rest!

Even at $0, it’s almost to too expensive to bother with. Most books have chapters longer than this. All episodes should have been combined into one book.

This was read well and funny. Just a little snippet story from her life.

my favorite one so far

This short story made me tear up a little and also laugh out loud. Highly recommend.

It will not be my last! #LOVEDit ❤️ And I've never watched The Office!

This was was a touching story about reconnecting to Hinduism that ended up being a mother-daughter connection story.

A very sweet insight into the life of the author, funny, cute and worth it!

loved it. far too short! can't wait to listen to the other chapters. mindy really made me smile.

Mindy Kaling is a genius and an incredible writer. Thank you for telling our stories and being so relatable to children of migrants, daughters, mothers, and people of colour.