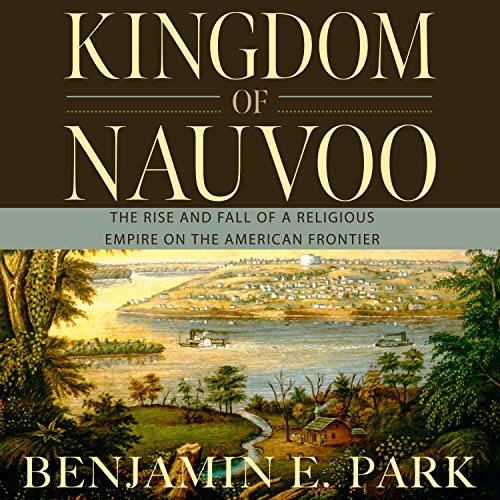 The Rise and Fall of a Religious Empire on the American Frontier
Written by: Benjamin E. Park
Narrated by: Bob Souer
Length: 9 hrs and 20 mins
Categories: History, Americas

An extraordinary story of faith and violence in 19th-century America, based on previously confidential documents from the Church of Jesus Christ of Latter-day Saints.

Compared to the Puritans, Mormons have rarely gotten their due, often treated as fringe cultists or marginalized polygamists unworthy of serious examination. In Kingdom of Nauvoo, Benjamin E. Park excavates the brief, tragic life of a lost Mormon city, demonstrating that the Mormons are essential to understanding American history writ large. Using newly accessible sources, Park re-creates the Mormons' 1839 flight from Missouri to Illinois. There, under the charismatic leadership of Joseph Smith, they founded Nauvoo, which shimmered briefly - but Smith's challenge to democratic traditions, as well as his new doctrine of polygamy, would bring about its fall. His wife Emma, rarely written about, opposed him, but the greater threat came from without: in 1844, a mob murdered Joseph, precipitating the Mormon trek to Utah.

Throughout his absorbing chronicle, Park shows that far from being outsiders, the Mormons were representative of their era in their distrust of democracy and their attempt to forge a sovereign society of their own.

Can't get over "Nauvoo" pronunciation

Good book, and I like Souer's voice and was excited for this audible book, but he pronounces Nauvoo as "nuvoo" the entire time and it drives me insane (to the point that I only focus on that). I looked it up to make sure I wasn't the crazy person, and no one else says it like that. I hope I can eventually get over it, especially when it is used through the entire book.

A more than marvelous work

What do you get when you combine boomtown dynamics, theocratic bravado, manifest destiny, church v. state battles, secret and illegal marriage practices, America's chaotic expansion, a charismatic leader, a malleable and dogmatic populace, and a whole lot of fun and wackiness? Something like Nauvoo, Illinois in the mid-nineteenth century. And Benjamin E. Park's book does a fantastic job weaving all of these threads in an instructive, fair, and compelling way.

Park unearths vital information that isn't widely and easily available to modern Mormons -- he goes deeper than the shiny, toothless representation of the Nauvoo period proferred by Mormon leaders and their correlation-mandated materials. Some of those friendlier happenings are true and essential to the story, but when they are isolated it gives a faulty, lifeless utopian feel to a vicious and visionary paradigm in both Mormon and American history.

It's imperative that both the Mormon and historical contexts go together in a C.S.-Lewis-which-shear-is-more-essential-in-scissors way for the story, and Park has the skills and sheer expertise to accomplish the task, raising the ghosts not just among the brick and ornate edifices, but the fallen wooden shacks and buildings as well.

In the book's final pages, a personal connection brought me joy. My great-grandma^4, Mary Ann [Frost] Pratt, was fed up with the secret polygamy of her husband, one of the earliest Mormon apostles, Parley Pratt, and was granted a divorce from him. I was happy to see her name in print since it took much resolve to stand up for one's self amid such patriarchal secrecy. It really meant a lot that a book of this import includes such seemingly small details since her husband (my great-grandpa^4) has had endless ink used on his behalf. She's a hero of mine and I feel honored to be her descendant.

The book has my highest recommendation, and I will soon re-read/listen.

Good listen, with one caveat.

Great book, good reader, except for the constant mispronunciation of Nauvoo. Very surprised they let that slide. Try to ignore it and listen anyway.

Mr. Park pretends to write an unbiased history masked with signals of education and scholarship that only serve as a thin disguise for a poorly written piece of anti-Mormon literature. Go learn from the Ron Chernow’s of the world who take great pains to illustrate all sides of historical events before you pretend to impress the world with your great wisdom. Good history leaves you with the great satisfaction that comes having a better understanding of the world. This book made me feel duped into reading cheap anti-religious garbage. What a waste of time.

An NFL Films Approach to History

I had high hopes for this book to “Tell the Story of Nauvoo” It however felt more like an NFL film recounting the milestones of polygamy and polyandry. No real story just a splattering of events that happened in Nauvoo told with a lack of emotion and interest that would even give Spock pause.

I was excited to see something on Audible on this subject that was not censored by Mormon influence, which is why 4 stars, but not on par with histories with broader appeal.