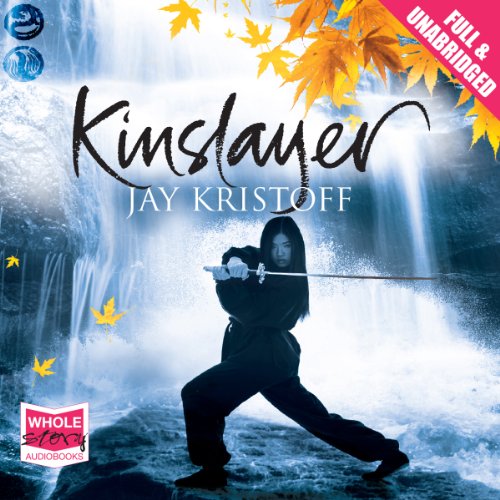 A Shattered Empire: Shogun Yoritomo has been assassinated, and the threat of civil war looms over the Shima Imperium. The Lotus Guild conspires crush the growing rebellion.

A Dark Legacy: Yukiko and the mighty thunder tiger Buruu have been cast in the role of heroes by the Kagé rebellion. But Yukiko herself is blinded by rage over her father’s death.

A Gathering Storm: Kagé assassins lurk within the Shogun's palace, plotting to end the new dynasty before it begins.

What listeners say about Kinslayer

Not my cup of tea

I found this book hard going - tried to listen through my own "whats going on?" but, could not listen too long before falling out. I see its had good reviews - well, not my cup of tea.

Captivating! Just a brilliant story with strong female characters! I just could not stop listening!

The storyline is riveting, the world created is so vivid. Jane's performance is perfect and brings all the characters to life

Story line is strong taking you to this world of strife. the characters are cool and make for good imagining. Yukiko is such a strong figure

What was one of the most memorable moments of Kinslayer?

Bought the series couldn't put the book down

I well laid out format sometimes predictable but then these things are sometimes hard not to.

Keep up the great work I am hooked