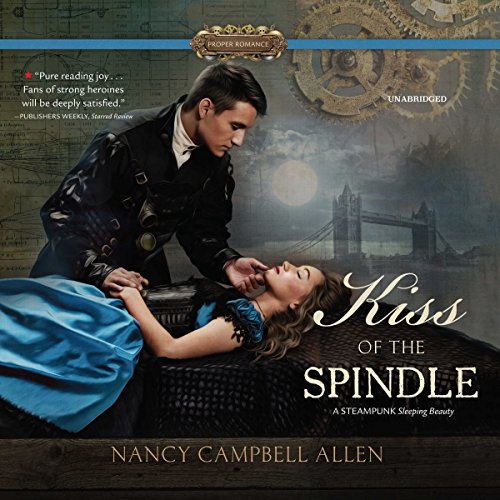 Kiss of the Spindle

Doctor Isla Cooper is cursed. Literally. Each night, at the stroke of midnight she falls into a deep sleep from which she cannot be awakened for six hours. To make it worse, the curse has an expiration date - after a year, she will fall asleep forever. And the year is almost up.

In a desperate attempt to find Malette - the witch who cursed her - Isla blackmails her way onto Daniel Pickett's private airship bound for the Caribbean, only to discover she's traveling with three illegal shapeshifters and the despicable Nigel Crowe, a government official determined to hunt down and exterminate every shapeshifter in England. Isla and Daniel must work together to keep the identities of the shapeshifters hidden while coming to terms with their own hidden secrets and their blossoming attraction to each other.

Filled with suspense, intrigue, and plenty of romance, Kiss of the Spindle is a steampunk Sleeping Beauty story. It is a race against the clock as Isla and Daniel try to hunt down the elusive Malette before Isla's deathlike sleep becomes permanent.

What listeners say about Kiss of the Spindle

Just as amazing as the first one!

I fell in love with Beauty and The Clockwork Beast and I have been awaiting the release of this book very impatiently! I was not disappointed! The original narrator is back and did amazing like last time, and the story is so good! It is equal to the first book in every way and I love it just as much! This is quickly becoming one of my all time favorite book series! Nancy Campbell Allen is immensely talented and brings new life to traditional stories! The books both stand alone and compliment each other in the most perfect way! Can't wait to see what's coming next!!!

The best of Ms Allen’s work. I love this story. Adventure, heroine, hero rescue and romance. However what makes it the best is that it’s clean.
Thank you for a great adventure and an inability to put the story down.

a fairy tale with a twist

loved the whole premise and the intriguing characters.a good, clean romance with enough tension between all the characters to make it interesting the whole way to the unexpected ending!

This book was,of course wildly different from the fairy tale, with steampunk elements and no royalty., but with the common sleep curse. Flying airships, as in boats, shape shifters and our sleep cursed heroine being an empath who tries to help the shape shifters while trying to search for a cure for herself before she sleeps forever are all a lot of fun. I think my favorite from this author is still Beauty and the Clockwork Beast – – though I will read anything she writes!

This was another fabulous steampunk re-imagining of a fairy-tale.
What I enjoyed;
-It's so different, you don't feel bored. Yet it follows enough of the story that it relates.
-The steampunk setting. It's hard to find well done steampunk, and this is perfect. It's a fun escape.
-The sweet romance. I appreciate that there's no sex or swearing. But that doesn't mean it's just for children. I'm 28 and enjoyed this book.
-It's as good as her other books in the series. Sometimes authors can't recreate the magic with sequels, but this was well written.
-I like that characters from her first book are referenced so you have an update in their lives.

I would recommend listening to the series in order, but it's also a great stand alone. This is the best version of Sleepy Beauty I've encountered, and one of the best steampunk novels I've read.

Story is cute. Gets slow at times but is worth listening to the end. I liked having a romance story that is sweet and not bogged down by sex scenes. I could listen to this with kids around.

I absolutely loved this book. The story, the characters, the setting, and the narration. I will be looking for others by this author and narrator.

Rollicking adventure on an airship, islands, and battling an evil witch. A heavily armed Isla blackmails her way onto Daniel's airship and right into his heart. Isla finds companionship and help in her quest to find the cure for the curse. Unfortunately, the title doesn't make any sense until the very end.

This was a truly delightful re-imagining of sleeping beauty. Entertaining storyline and fun characters.

The only thing wrong with this series is that each story is too short. More detail and development would be awesome. But don’t hesitate to enjoy every one!