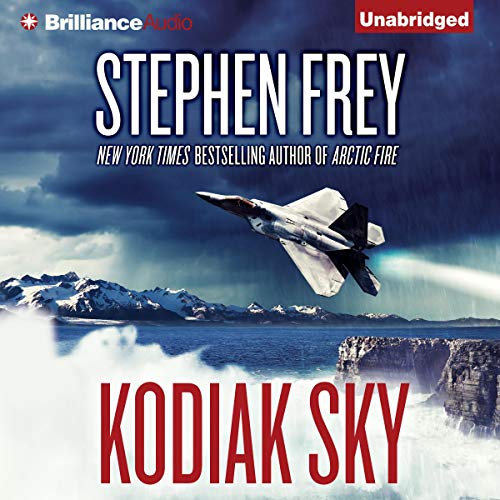 For decades, the top-secret Red Cell Seven unit has operated beyond the reach of the law - defending the United States by any means necessary, with absolute impunity. But the tables have turned, and the untouchable anti-terror squad is under attack. Determined to end Red Cell Seven’s ruthless, lawless existence, the US president has tapped military assassin extraordinaire Skylar McCoy to lead a covert search and destroy mission. But McCoy isn’t the only one gunning for Red Cell Seven. A vengeful drug lord has dispatched his own hired killers to eliminate the elite commandos as the first step in the ultimate terrorist plot: exterminating the highest echelons of American government. Caught in the middle, the agents of RC7 must fight their dirtiest, most devastating battle - and dare to decide who will be saved or sacrificed for the greater good.

What listeners say about Kodiak Sky

I believe I have read or heard all of Stephen Frey's books. This one is just over the top silly. It's like he dropped a jumbled Rubik's cube on the floor, it bounced a couple times and ended up with solid colors on all the sides. And Luke Daniels? When I got to the end I could not believe it was Luke Daniels. Usually he's just fine. This time I think the best was to describe it is to say 'imagine a couple 9-year-olds playing Batman'. It wasn't quite bad enough to return or quit on but near the end I was thinking 'Please, God, just let it end soon.'

I enjoyed the series

I enjoyed the series, although the 2nd book was a bit thin in places.
Interesting story line and characters, and I would like to read more from them .
Quite scary that this can probably happen
The narrator was excellent.

Patriots sacrifice everything for this country and get very little appreciation. and want no recognition.

Performance was very poor, story shallow with too many references to previous book plots. I won't purchase more from this author.

After reading the description, I was very excited to listen to this book. However the individual reading it has a horrible voice. I did not make it through chapter 1 before I erased it off my device. Bummer.

The Red Cell Seven is a covert group created in the 1970s by US President Richard Nixon in an effort to prevent attacks against this country. The black-ops group reports only to the President. No oversight. No restraints. Free from any prosecution. Unlimited budget. No questions asked. Basically, government-approved vigilante authority, include murdering at will as required, at their discretion - even innocents deemed a threat.

Book 1 starts with the formation of Red Cell Seven. It's called 'seven' to throw the Russians off - President Nixon thinks Russians spend all their time looking for the first six covert operations. That's pretty much the only reference to Russia - the series is mostly about preventing domestic and Islamic terrorism - in addition to targeting the current administration with multiple assassinations because the current President wants to shut down Red Cell Seven.

Not so hot. The books are very similar, not that there is anything wrong with any of them - none stands out. It's just a very long espionage story. Depressing in that it's possible. Read from book 1, Arctic Fire. Book 2, Red Cell Seven, Book 3 Kodiak Sky.

You'll be left torn as to if the behavior portrayed in Red Cell Seven is a good thing - or not. It's sorta scary to think our government is capable of this stuff - but, it is. Exhibit the current President in 2019, who believes he can "do anything he wants", and America does nothing to stop him.

YES!! The hole series what action after action, if you like that then this is the Series for you!!

Some of the story did not coincide with the other