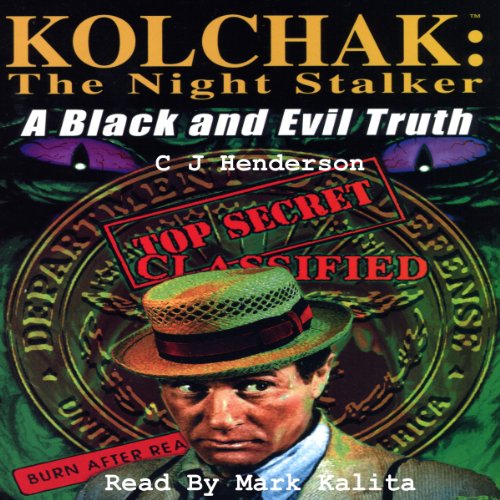 Kolchak the Nightstalker: A Black and Evil Truth

Carl Kolchak was just your average reporter until the day he put two and two together and came up with evil. A reluctant paranormal investigator, Kolchak couldn't stop tripping over the unusual even if he wanted to. And for all of his efforts of seeking the truth... unemployment and ridicule have followed him like the plague.

Someone, or something, is tearing people up into little pieces in small town West Virginia. It's up to Kolchak to wade through the bloody-science jigsaw puzzle, while watching his back against an unseen foe! It's a cat and mouse game, as he battles a maelstrom of terror that everyone around him gets sucked into.

A real Kolchak voice but with a far-fetched ending

Would you listen to Kolchak the Nightstalker: A Black and Evil Truth again? Why?

No. It was a great story but a disappointing ending. Too scientifically and government-conspiracy oriented.

Would you recommend Kolchak the Nightstalker: A Black and Evil Truth to your friends? Why or why not?

Yes. Only because the narrator nailed Darren McGavin to the "T".

What does Mark Kalita bring to the story that you wouldn’t experience if you just read the book?

It made me proud to be a Kolchak fan. My favourite television show of all-time and my favourite character.

A great read but a disappointing ending. It went a tad too far. I like it when Kolchak is in his own element and is the lone wolf. I did not particularly enjoy his Casanova diversions either; this takes greatly away from his real character.

Worthy of the Night Stalker

Very much enjoyed. A very worthy edition to the Kolchak universe. Would love to see another one.

This is Carl Kolchak's ultimate adventure.

If you could sum up Kolchak the Nightstalker: A Black and Evil Truth in three words, what would they be?

we meet a country sherif named Jeeter, who I could only see portrayed by a western-hat-wearing cowboy-dude who looked & sounds exactly like a well-aged Jeff Bridges.

Which character – as performed by Mark Kalita – was your favorite?

This reader does a great turn as giving all these dimensional characters the life they need as they are put into a story filled with weird-o-gore, spooky-twists, intelligent wit, and a lot of heart.

Kolchak the Night Stalker - A Black and Evil Truth.

This is Carl Kolchak's ultimate adventure.

In this tale we know all about Carl's life - his discovery that VAMPIRES are real. UNDYING NIGHT STRANGLERS do exist. We also know about Carl's good and hard stomping by various state government and police agencies, and the hush up afterward that sent him running down the career-path to no-where.
Not, no-where, but more like "Monster-Land". It's just one horrible monster after another as Carl Kolchak becomes a legend on the internet while he finds, and fights, and kills, nearly every known & unknown creature that stalks the night.

In this book, we get a great cast of characters. To back up Carl's awesome one-man character study of normal guy turned hero we get his editor and chief and friend Venchenzo. Yes, he again appears with a even seedier news rag and a stranger story to send Carl to report on.

Also we meet a country sherif named Jeeter, who I could only see portrayed by a westerner-hat-cowboy looking "dude" - a well-aged Jeff Bridges.

Then, just to bring everything in pop culture together, we include Dana Scully and Fox Mulder from the X-Files.

Of course, this stellar cast (in my brain) has leading man Carl Kolchak played by Darren McGavin. Only he could make Carl come alive. this reader does a great turn as giving all these characters the life they need as they are put into a story filled with weird-o-gore, spooky-twists, intelligent wit, and a lot of heart.

This book is pure ecstasy for a fan of Carl Kolchak.
Really, this is the ultimate Night Stalker Tale!

All the monstrous happenings in Carl Kolchak's career are basically explained in a decent way. This happens with a villain so much like a Bela Lugosi in his prime, he's well-rounded to the point that he's almost as much fun as flat out creepy.

This is a golden-measure for all NIGHT STALKER tales.

I don't think you can write another one after this one. This is everything you wondered about laid out in a blood-red blue-print - explained in the best sci-fi fantasy horror kinda' way. It's like the movie "Cabin in the "Woods". All so much fun…. you feel like you didn't read, or listen, to a book but took a amusement park "Ghost-Train" ride!

boring and poorly performed. I didn't even finish and I LOVED the TV series and normally books are even better. this is not one of those times. also they get subtle political digs in that could have been left out.

Would make a great series finale

What did you like most about Kolchak the Nightstalker: A Black and Evil Truth?

C.J. Henderson has always worked well with the supernatural mystery format, so he's a natural fit for the continuing adventures of that most down to earth of occult sleuths, the inestimable Carl Kolchak. His prose capture's Kolchak's unique voice perfectly, and the story does a great job of finally addressing the elephant in the room when it comes to explaining exactly why poor old Carl seems to run into monsters and mayhem everywhere he goes. In many ways this would make a terrific swan song for our knight in rumpled seersucker, neatly wrapping up the series with a nostalgic adventure in which many of Carl's more notable TV adversaries are name-checked.

Quite obviously, my favourite character has to be Carl Kolchak, who is so vividly drawn in this story that one can easily imagine Darren McGavin narrating the tale.

What aspect of Mark Kalita’s performance might you have changed?

Sadly, Mark Kalita is no Darren McGavin. He doesn't even try to be which, given the quality of the sadly-missed former Kolchak's performance, is perhaps something to be welcomed. However, his voice and delivery is such a mismatch to the distinctive cadence of Carl's use of language that it does take some of the fun out of the tale. Next time, perhaps it would serve the story better to get someone with delivery a little closer to McGavins. Kalita is an adequate reader, but too avuncular to capture Kolchak's acerbic humour.