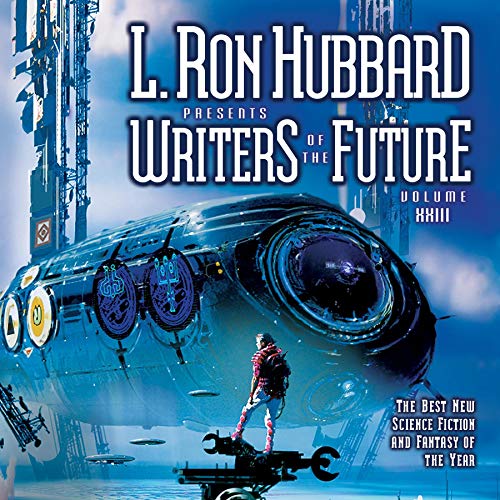 Listen to the best new science-fiction and fantasy short stories from up-and-coming writers. Established in 1983 by L. Ron Hubbard expressly for the aspiring writer, Writers of the Future has become the most respected and significant forum for new talent in all aspects of speculative fiction. The elite character of the contest is evident from the roster of judges: Kevin J. Anderson, Doug Beason, Gregory Benford, Algis Budrys, Orson Scott Card, Brian Herbert, Nina Kiriki Hoffman, Eric Kotani, Anne McCaffrey, Larry Niven, Frederik Pohl, Jerry Pournelle, Tim Powers, Robert Silverberg, and K. D. Wentworth. Since its inception, the contest has helped place more than 250 novels and 2,500 short stories on bookshelves around the world. The Writers of the Future Award has also earned its place alongside the Hugo and Nebula awards in the triad of speculative fiction's most prestigious acknowledgements of literary excellence.

The stories are illustrated by budding new artists, all winners of the annual Illustrators of the Future Contest. Download the accompanying PDF to see the illustrations.

What listeners say about L. Ron Hubbard Presents Writers of the Future, Volume 23

Ok but not gripping

Most of the stories were slow, a few ok. 1 or 2 were insightful and fresh.

Only a few worth lisetening to.

I'm 70% through with "Writers of the Future" and I really expected more from the collection of winners. Some of the stories just seemed to have no point, some had little to do with SF. Maybe the last 30% will save it for me.

The Writers of the Future anthology rarely disappoints and 23 is no exception to this pattern. I've been entering the contest the last three quarters and listening to the stories through audible has been a great way to get better exposure to what's required to write a winning story. There's no doubt in my mind that every story in here is exceptional. Many are better than the stories written by established professionals. Many of the authors in this collection are now recognizable names in the industry and have gone on to win awards and meet with even greater success.

As for the stories, there were a number that stood out as my favorites:

Primetime had a number of affecting moments of character for me. I also found it made great use of time travel.

The Stone Cipher was both beautifully written and well told.

By the Waters of Ganga was an exceptionally unique take on an alien first contact and an exploration of the power of story and faith.

Finally, I loved Mask Glass Magic for its unique take on practicing a craft and occult knowledge.

This was a wonderful collection and well worth the read.

I have listened to these stories and read the book. What I like about the audio is that I can listen to a story in between other activities as it is sometimes hard to devote myself to a long single novel. I highly recommend this book to anyone who enjoys science fiction storytelling.