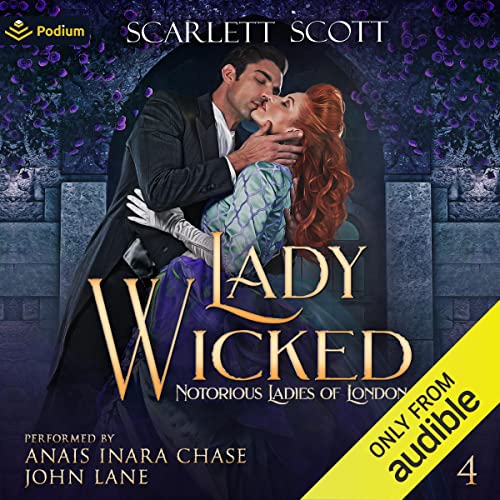 One reckless moment was all it required for Lady Julianna Somerset to lose her innocence to her best friend’s brother.

When he broke her heart, she fled London to heal her wounded pride. But a desperate change in circumstance has forced her to return. In a cruel twist of fate, the man who ruined her may be the only one who can save her.

Sidney, Lord Shelbourne, has always wanted one woman at his side and in his bed. The only problem? She refused his proposal of marriage and disappeared from his life. He’s resigned himself to a life of duty when her arrival in London rekindles old, dangerous flames.

Sidney has not forgiven Julianna for spurning him or for the shocking secret she has been keeping. Now that she needs his aid, he has a plan. Revenge will be his, and so will she. But Julianna is determined to protect herself against the handsome lord she never stopped desiring. This time, she has vowed she will be the one to force his surrender.

What listeners say about Lady Wicked

I’m a new to this series but in this book in particular my annoyance of how long it took for them to share the truth made me want to stop listening. Whereas the other books had other elements that brought suspense and they paced well with revelations. Juliana started to become a little annoying.

This story of the series was so sweet and sexy. I love their love story from the beginning and how they found each other again years later.

this audiobook was not up to par with the others in this collection; In addition Ms. Chases’ narration was most irritating with her mono-tone soft whispers. Mr. Lane was excellent as usual (the only reason I continued to listen) book was not worth the one credit!

I truly enjoyed this book. Sidney was my favorite. He wS melancholy but funny. The narrator brought him to life for me. Juliana on the other hand tore my nerves up. So childish and petty. I hated that she refused to accept her part in what s had wrought by not asking questions. All in all it was a great story. Looking forward to the next book in the series.

I Loved this Book

Yet another brilliant book from Scarlett Scott. I am loving this series as each book is such a different plot.
The thing I love about Scarlett Scott is she doesn't have the drama of the book last for 90% of the book. There is some humour which adds to the enjoyment.
I would definitely recommend it.