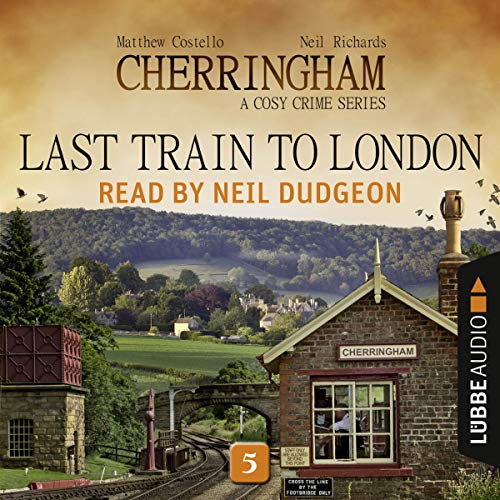 Cherringham is devastated. Otto Brendl, the likeable old man who had hosted the classic Punch-and-Judy show for the kids each summer, died suddenly of a heart attack. But while the memorial service is being planned, Jack becomes suspicious that Otto wasn't just the friendly man next door. Maybe there's more behind the heart attack? Soon Jack and Sarah are on the trail of a particularly sinister murderer - and together they will find that there's not only one kind of justice.

Cherringham is a serial novel à la Charles Dickens, with a new audio episode released every two weeks. Set in the sleepy English village of Cherringham, the detective series brings together an unlikely sleuthing duo: English web designer Sarah and American ex-cop Jack. Thrilling and deadly - but with a spot of tea - it's like Rosamunde Pilcher meets Inspector Barnaby.

Each of the self-contained episodes is a quick listen for the morning commute, while waiting for the doctor, or when curling up with a hot cuppa. For fans of Agatha Christie's Miss Marple series, Lilian Jackson Braun's "The Cat Who" series, Caroline Graham's "Midsomer Murders", and the American TV series "Murder She Wrote", starring Angela Lansbury.

Co-authors Neil Richards (based in the UK) and Matthew Costello (based in the US), have been writing together since the mid 90's, creating content and working on projects for the BBC, Disney Channel, Sony, ABC, Eidos, and Nintendo to name but a few. Their transatlantic collaboration has underpinned scores of TV drama scripts, computer games, radio shows, and - most recently - the successful crime fiction series Cherringham. The narrator of the audiobook, Neil Dudgeon, has been in many British television programmes including the roles of "DCI John Barnaby" in "Midsomer Murders" and "Jim Riley" in "The Life of Riley". He is also known for his film roles in "The Nativity", "Sorted" and "Son of Rambow". In 2012 Dudgeon starred as "Norman Birkett" on BBC Radio 4's Afternoon Play series written by Caroline and David Stafford.

What listeners say about Last Train to London

I love these short stories and looking forward to each book. A great read for road trips!

This one is different, but riveting, nonetheless and goes a long way to proving that things are not always what they seem. The ongoing sleuthing involves a retired and widowed older NYPD homicide cop who is finding life in the English countryside a fair antidote to his mourning, and a local recently divorced woman who has returned to her hometown with her children. They make a good sleuthing pair.
Voice actor Neil Dudgeon has been an asset to my listening pleasure while I do mindless things.

Can’t get enough of the duo. Neil Dudgeon is the best audio book reader ever. Feels like I go on vacation with every book I read:)

This was a particularly good listen. Intriguing story. Well read. As always, Neil Dudgeon is excellent as a reader.

It's great to see progress in all aspects of this story. Much better narrative too.

Ah, Cherringham, the murder capital of the Cotswolds, has lost its' puppeteer to murder. Why him? He's reclusive, secretive and keeps his puppets under lock and key. Now he's dead. Bring in the hometown investigating team and unlock this quick listen of another crime in Cherringham.
Neil Dudgeon did a great job at narrating this story.

I like the Cotswolds, but next time I'm there, I will watch my back.

I was hook at the 1st book of the series. When book 5 was over I didn't want it to end.

This wonderful series, which is being released in 2 to 2 1/2 hour sections, is simply delightful.

First rate as usuall, when are we going to get another series of stories to délight us, can't wait 👍

I had already read this story. My mistake instead of book collection 13-15 I somehow ended up with book 5! Very disappointed.

a listenable little story took a while to get the storyline. narration annoying at times