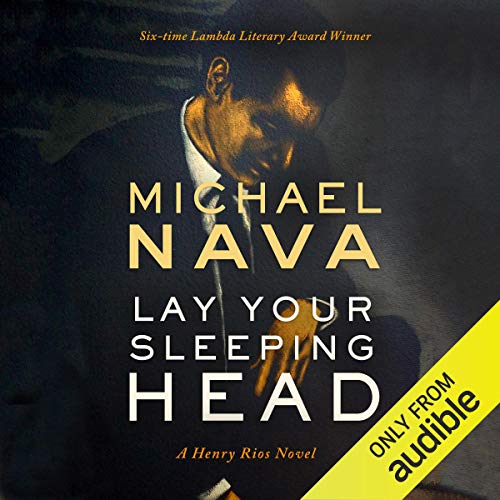 A completely revised edition of the first Henry Rios mystery, The Little Death, Lay Your Sleeping Head introduces Michael Nava’s singular protagonist, gay Latino criminal defense lawyer Henry Rios. Rios, beset by personal and professional problems, begins a passionate affair with the black sheep heir to a great California fortune who tells Rios an improbable tale of murder and sexual predation in his wealthy family. When the young man is found dead of an apparent drug overdose, Rios begins an investigation that ultimately reveals much more than that his lover’s death was murder.

What listeners say about Lay Your Sleeping Head

I don't have any experience with the previous version of this first novel in the Henry Rios Mystery series by Michael Nava. I've recently come back to the mystery genre and found that a couple of Mr Nava's books were on sale and whispersynced. I also read a good bit of M/M romance, so I decided to give the mystery/romance combination a try.

Henry works for the public defender's office for all the right reasons: he wants to help his clients receive justice. Because of his strong sense of right and wrong, he is burned out by the injustice that is meted out. He meets Hugh Paris, a recovering junkie who has a dark past. Henry and Hugh become lovers before Hugh is found dead. Henry is convinced it is murder and not accidental.

The character of Henry Rios is exactly what I love about a legal mystery. Henry is a regular guy trying to figure life out. Someone who is flawed, but still a good person at heart. He and Hugh are like lonely, lost little boys that have finally found each other to love. Watching Henry's personal journey of finding love and finding the killer are equally satisfying. I have a few more Michael Nava novels that I almost can't wait to dig into.

Narrator Thom Rivera performs the novel excellently. He brings all of Mr Nava's characters and action to life.

Mystery and a Love Letter to an San Francisco

It's been years since I discovered Michael Nava's books at the late, great A Different Light bookstore in the heart of the Castro District. I was happy to read about a gay man of color; then as is now, the publishing industry seems to think stories about white, straight passing or pretty chiseled twinks are the sum of the LGBTQ experience. Henry Rios was the kind of hero that resonates as much now as he did then, and it's both interesting and sad to think many of the same issues of race, gender and homosexuality are still with us to varying degrees. Rios is that flawed hero one cannot help but root for while also wanting to smack some sense into him at times. While this is a definitely a mystery novel with convoluted threads of family dynamics and dysfunction, Mr. Nava wrote a love letter to a city that I lived in beginning in 1984, when AIDS was cutting through a large swath of the gay community. I lost many close friends, teachers and neighbors to that disease and through it became even more political. Yet the fond remembrances of streets I walked many times, places I'd worked, neighborhoods I'd lived and loved in. It's all here, and the narrator did an amazing job. I'm looking forward to re-reading/listening to the rest of the Henry Rios series

Michael Nava’s Lay Your Sleeping Head is the first book in what has become a classic gay mystery series. In this audiobook version, it's perfectly brought to life through Thom Rivera’s spot on narration.

As readers of gay mysteries know, this revision by Michael Nava of his original Henry Rios Book 1, The Little Death, introduced the world to Henry Rios, a gay Latino criminal defense lawyer in San Francisco. Rios has since become the primary character in Nava's highly acclaimed series.

In Lay Your Sleeping Head, Rios, who has taken to heavy drinking for reasons explained in the narration, meets and quickly falls in love with Hugh Paris, a heroin addict trying to stay clean. Paris comes from a dark, complicated but privileged background. When Paris is found dead, Rios is convinced he was murdered. With a set of masterfully crafted supporting characters, Rios sets out to prove his theory.

Set in a different time, the early 1980s, there is only the briefest mention of the emergence of a new ‘gay cancer’ that is now far too well known as AIDS.

I've now joined the ranks of Michael Nava's fans and look forward to the next book in his Henry Rios series.

I have so many feelings. This book utterly enraptured me. I loved everything about it, the gentle pacing, the plot and characters and I loved the narration. Do not be fooled by this book. It might start out and masquerading as a sweet romance novel, but it’s anything but. There are many twists and turns that will play with your emotions in the best and worst way, and in the end you are left as an emotionally wrung out puddle, desperate for more.

This book is set in the early 80’s where Henry Rios was a criminal defence lawyer who just lost a death penalty case where his client was innocent. It was the last straw that broke his proverbial back and he realised he needed a change. That change came in the form of a beautiful white boy (figuratively speaking, the man was 26) in a great deal of trouble legal and otherwise. The sparks fly between them from that first meeting in an interrogation cell, and with every meeting they get more and more involved. But Hugh is troubled, he has a lot of secrets and lies and a fantastic tale about abuse and murder, addiction and solicitation. He’s on a mission to bring the man who’s responsible for his family’s deaths down.

The romance between Henry and Hugh had all the hallmarks of insta-love. They had an instant connection and recognition, they were quick to fall for each other. But at the same time it didn’t feel like it. It felt like they belonged together, they complimented each other. Neither man perfect, both haunted in different ways – but they had this inherent understanding of the other. They quieted each other’s ghosts.

Henry was flawed, human. We meet him when he’s down, watch him stumble, fall and rise again – only to start the cycle over again. There was no rose coloured shine near this book. It was gritty, emotional without being dramatic. It’s a book everyone loving gay mysteries should give a try, because I don’t think it gets better than this.

Sometimes it’s a good idea to read the blurb before jumping into a book, and sometimes it’s better not to in order to get the full impact of the story. This time I both I didn’t read the blurb, and I did. I saw recommendations and raving reviews and ratings and figured I needed to know what the hype was about, as for the blurb I figured I would know what the book was about soon enough and to jump into it with an open mind. By pure chance, when I was about a third into the book I did read the blurb. And I’m both sad and glad that I did. Glad to know what to expect so that it wouldn’t utterly destroy me (especially since I’m listening to the book at work and people might wonder why I’m sobbing away rivalling a crying baby), at the same time the events didn’t have the same shock-value as it might have had, had I not read it.

Thom Rivera was the perfect choice of narrator for this book. He was absolutely fantastic in every way imaginable – and I’m not exaggerating even a little bit. The pacing, enunciation was spot on, not to mention he had a wonderful and pleasant voice, one I’d happily listen to for days on end. Rivera captured Hugh’s sassiness and flirty nature, just as he captured Henry’s beaten down demeanour and fascination with Hugh. He has many different voices to distinguish between the characters, they are consistent and match with the character’s personality. I also have to say his female voices are also very credible and well done. He’s a narrator I want to listen to many, many times more.

After listening to this book I am sure of one thing; I definitely need to listen to the next book as soon as possible. I might be slightly addicted. Highly recommended.

This book was so very good. Henry Rios is a realistically flawed young man. The plot intricately layered with twists and turns I didn’t see coming. This isn’t your regular mm or gay romance novel. There is romance here but the real story is the mystery, how it affects a Henry and how he solves it. Amazing start to a series and the narrator was perfect.

Absolutely excellent, both narrator and writer. Thom Rivera does an incredible job. Can't wait for more!