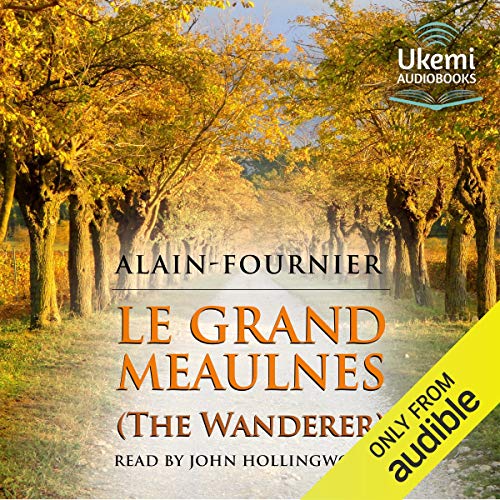 Le Grand Meaulnes is one of the great classics of French literature, a mysterious, even impressionistic tale of adolescence in the French countryside in the dying years of the 19th century.

A teenager, Agustin Meaulnes, arrives in a country school, and his strong personality immediately affects its rural atmosphere, especially in the eyes of his younger school companion, the 15 year old François. He is dubbed 'le grand Meaulnes', and he lives up to his reputation by going missing for a few days. He says little about his adventure on his return. But François eventually discovers that Meaulnes stumbled upon a strange party held at an unknown chateau, and became enmeshed in the lives of the beautiful young Yvonne de Galais and her brother Frantz.

Love, confusion, the urgency of young passion propels these three along unpredictable paths, observed anxiously by François, who desperately wants to help solve and resolve the mysteries. But Meaulnes and Frantz are driven by their own emotions along a trajectory which is anything but simple and straight.

Le Grand Meaulnes, regarded by John Fowles as 'the greatest novel of adolescence in European literature' has cast a remarkable spell on successive many generations.

In turn elliptical, impressionist, hopeful, haunting, Le Grand Meaulnes made an immediate impression on the French public when it was first published in 1913 (a year before its author died in the First World War) and swiftly gained a permanent place in European literature. The translation by Françoise Delisle has been revised for this recording.

An enigmatic character who is thrown into a fairy tale world for one day. Only the world is real but bound to be lost. This is a coming of age story. A story of love and friendship, of happiness and pain. The backdrop of quaint French villages long since gone adds a rare charm. But its the pairing of a brilliant writer with an equally brilliant narrator that makes this book an unforgettable experience. This book allows the reader to step inside the main character who's thoughts and feelings are almost palpable. Instead of being a passive observer, you live the book, you feel the magic. The performance is worthy of the writing. This is one of those books that never lets you go, it's like a dream that keeps coming back and you wonder whether you dreamt it or actually lived it...


My long-ago first reading of Le Grand Meaulnes left me with a powerful mystical swathe of impressions, and it has been fascinating to listen so many decades later to find that my perspective has altered. This time around I found I was seeing with the 15 year-old growing-up-boy narrator, Seurel, who narrates the complex story (rather as Nick Carraway narrates The Great Gatsby), observing as if watching an opera, rather than feeling bound up with the youthful passions of Meaulnes and Franz. Experience tells you that once Meaulnes has consummated his innocent fantasy-passion for Yvonne, it will disintegrate, and that the search of Franz for his runaway fiancée Valentine will bring him pain and destruction. What gives an extra layer of poignancy to Le Grand Meaulnes is the death of its author Alain Fournier just weeks into the Great War which keys into his novel’s theme of loss. Whatever dreams Fournier had nurtured were extinguished and the rural France of his novel was gone for ever.

Whatever your age, the visual and emotional intensity of the story is overwhelming. It’s all a great theatre in the head as you listen: the purity of Meaulnes’ and Franz’s romantic love made up of dream, enchantment and longing; the fantastical masquerade in the grounds of the hidden chateau where Meaulnes first sees Yvonne; the tangled mesh of impossible love; appearances and disappearances; insatiable wanderlust; disguise and carnival; searches with mysterious maps; the pain of terrible loss, yearning and desire…. So it goes on.

And to balance all this, there is the level-headed Seurel, the son of the teachers at the country school where 17 year-old Meaulnes suddenly appears, alluring and intriguing only to disappear and reappear three days later with a fine silk waistcoat beneath his school jacket. Seurel matures over the years and through him we feel the rather melancholy ordinary rural life in Sologne at the end of the nineteenth century with the schoolroom, the horses, carriages and domestic drudgery.

The narration is exactly right. John Hollingworth with his short a’s and unobtrusive gentle northern phrasing is just right for keeping us in Seurel’s sombre real world from which we view the unfolding of Meaulnes’ bright wanderings.

one of the great french novels

l reread this book every few years and each time it is an exciting and enchanting book, evoking a time when the world was about to change, yet still full of the harshness of country life, through which the story of love and fantastic memory runs.

Heard great things about this book however personally I found it very slow going and boring. Considering it is set in France there appears northern English accents which is offputting to say the least. I gave it a good go but in the end I had to switch it off.