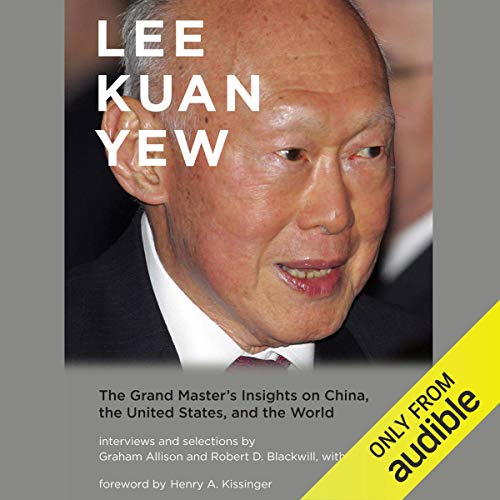 Lee, the founding father of modern Singapore and its prime minister from 1959 to 1990, has honed his wisdom during more than fifty years on the world stage. Almost single-handedly responsible for transforming Singapore into a Western-style economic success, he offers a unique perspective on the geopolitics of East and West. American presidents from Richard Nixon to Barack Obama have welcomed him to the White House; British prime ministers from Margaret Thatcher to Tony Blair have recognized his wisdom; and business leaders from Rupert Murdoch to Rex Tillerson, CEO of Exxon Mobil, have praised his accomplishments.

This book gathers key insights from interviews, speeches, and Lee's voluminous published writings and presents them in an engaging question and answer format. Lee offers his assessment of China's future, asserting, among other things, that "China will want to share this century as co-equals with the U.S." He affirms the United States' position as the world's sole superpower but expresses dismay at the vagaries of its political system. He offers strategic advice for dealing with China and goes on to discuss India'sfuture, Islamic terrorism, economic growth, geopolitics and globalization, and democracy.

Lee does not pull his punches, offering his unvarnished opinions on multiculturalism, the welfare state, education, and the free market. This audiobook belongs on the reading list of every world leader - including the one who took the oath of office on January 20, 2013.

Will teach you a lot about foreign policy, administration leadership and much more. Anyone with an interest in the above subject can submit.

Lee Kuan Yee needs no introduction. This audible is a pure gold. It is so good to hear the compilation of his speeches together in one place. It is so immersive that you want to keep an hearing from one of the most respected and greatest minds. Thank you audible for such a great compilation. I will be replaying it again.

Until I read this short book I did not know much about Yew except that he took over Singapore after World War II and is the founding father of modern Singapore. Yew was Prime Minister from 1959-1990.

Graham Allison and Robert Blackwell two leading strategic thinkers asked Yew questions and also put together information from his voluminous writings and speeches. The book is mainly in a question and answer format, the result is this concise, but important book.

I found myself engrossed in the incisive wisdom presented by Yew. I really enjoyed the following comment in the book. “China tells us that countries big and small are equal, that it is not a hegemon; but when we do something they do not like, they say you have made 1.3 billion people unhappy. So please know your place.” When asked if India will match China’s rise? Yew said “Not likely, India is not a real country. Instead, it is 32 separate nations that happen to be arrayed along the British rail line.” I think Yew’s comments about China are right on the mark. When asked by the authors will China accept its place within the postwar order created by the United States? Yew answered, “No. It is China’s intention to become the greatest power in the world—and to be accepted as China, not as an honorary member of the West.” One comment he made has got my attention. Yew said “The United States focuses on individual rights but has failed to pair this with individual responsibility.

Yew is 90 years old and his comments on the United States are pertinent to many of the debates in which we are enmeshed today. This book has triggered my interest to learn more about this most insightful man. Michael McConnohie and Francis Chau narrated the book.

How to make a great Nation - by a Nation Builder

Singapore will probably replace NYC as the most important business city in the world, this will largely be due to the hard work of this brilliant man.

It's awesome that he can be so candid and open. This is truly authentic self expression. You will learn something.

The wisdom of Lee Kuan Yew rings through the content. It's worth every penny.

It is a great book to read after a Joe Studwell book. The Studwell books cover the Economic Environment of Asia since WW2 and this book covers how Lee Kuan Yew applied Realpolitik brilliantly in Asia's dynamic conditions.

It's hard to describe how insightful this book is on a pragmatic approach to leadership. Lee Kuan Yew's insights and actions as a leader transformed his "city" into an internationally recognized financial power center. After listening to his thoughts on different perspectives from cultural to civic responsibilities, you get a sense for the man that transformed his tiny country into the Asian power player it is today. If you're a politically correct person - walk away. Lee Kuan Yew is NOT for you. His philosophies carry aspects of Confucian, Clausewitz, and even some Hobbes. Critical to everyone and yet complimentary to everyone - this book is a must for students of international relations.

Worth the read but a lot of dated information

To be sure Lee Quan you has much wisdom and insight that we can learn from. However while the authors made a valiant attempt to cobble together many different responses quotes and statements by Lee Quan you, there were a noticeable amount of references that were dated or in other words referencing trends and current events that were 20 or more years old. I would still recommend this bookSpace however I would advise the reader that the statements” were made over a period of 15 or more years. Submit

Very inciteful geo-political views by Lee Kuan Yew. He is indeed an asset the up coming Generation Z politicians.

I've traveled the world, hired and lived with common people, and his comments about America prove he's either only watched TV, Asian based news about America, or has a narrow experience. These comments are common around the world, sadly. I can say, yes, for example, areas of San Francisco mirror dysfunction, but statistics, how this area is a magnet for the vagrants due to local politics, warm weather, and apathy, can give this impression. Drive 5 miles out, where I lived once, and it's very healthy.

Historically non-American's can't understand this planned system. It drove the Soviets nuts because it wasn't predictable. That is only one example.

This was a great listen. I enjoyed very much the ideas of this man.
This is a good book to read or listen to to have a view of the current political worlds

Lee says that Singapore has to embrace foreign influences or it will be swept away. I happened to be travelling to Singapore in January and my passport was valid to June of that year. I was not even allowed to board the plane from Phuket (Singapore gvt demands 6 months valid passport), even though I had an onward ticket from Singapore long before passport expiry and was planning to spend quiet some money there. I have to conclude Singapore is not build in Lee's image, but it is a scary police state, patrolled by rule obeying nazis of questionable IQ. If their order sheet said to amputate every right leg of incoming tourists, they would obey without questioning and the rulers of Singapore would no doubt be proud that Singapore was not corrupt and executed orders without mercy.
Many countries in asia have 6 months passport validity demand copied from each other, but luckily they have corrupt governments who do not threaten people or airlines that bring those people, but take a bribe and all are happier because of it.

This is a must-read if you want to understand how he was able to bring Singapore into a first world country . You may not agree with him, but to understand his thinking is very beneficial. World leaders could benefit from understanding this man.

Could've been Longer and more insightful

Right up my street

I love reading but reading this book was like someone had translated and put into text my pattern of thoughts. Absolutely brilliant and a must read. I am definitely recommending and buying copies as gifts for selected friends

Best practical insights I have read on how nations develop. This is a must read.

A number of good insights about different countries. Nothing much on the specifics of how Singapore rose from the 3rd world to the 1st. Great insights into welfarism and the decline of some Western countries. Disappointed about his attitude to the students of Tiananmen Square. overall-mixed feelings about this book.

From the first page through to the last page, I was captivated by the brilliance of Lee Kuan Yew.
I recommend this book, absolutely.

This is a book for those who are curios and determined to build greater things in life for the greater good. It is related in an interview style that seduces your attention which reveals the wisdom of one of the greatest entrepreneurs of all times, who has built a healthy and reference start-up: the state of Singapore.

LKY is a grandmaster of policy making. Unfortunately, this book is butchering existing speeches and books together to answer some questions the authors thought are interesting for a Western audience. You probably get a better sense of the man if you just listen to some of his speeches on youtube.

analysis of world powers from a wise man

Lee is a wise man and very acknowledgeable. He says he had no philosophy but his approach speaks he's pragmatist (that which works is good) and utilitarian (greatest good for greatest numbers).
He identified well the virtues that make a human being successful and applied it to Singapore. This book is unfortunately not about details of how Lee made Singapore successful but about his view on evening and statesmanship in general. It's still good, best analysis of world powers I've ever read but I wish I picked a book about Lee himself and details of his work on Singapore.

Based on interviews. That us the value of thos book: to hear the opinion of Lee Kuan Yew on various matters. Would have been good for one hour long documentary. The beginning od the book is nearly a chapter of praises of Lee by all kinds of people which in my view downgrade the quality of book. I got this one only because Lee's autobiography was not available in audiobook, and I feel that I made a wrong decision.

Not so much a book but an insight into the views of a political giant. Lee demonstrates clear messages on topics of global economics, politics and social matters. Mr Lee will be missed as a leadership figure.

OMG so good! If a politician can pick up half of the knowledge of Lee the world would be a better place.

both the author and the narrator must be equally credited to making this audio book a success!

A wonderful book that both educates the reader on geopolitics while providing insight in to the thinking of Lee Kuan Yew.

It becomes easier to understand the impact he had on Singapore’s success and why world leaders enjoyed his conversation.

Deeply insightful thoughts and a great mind, a must-read for everyone who is interested in politics, economics and trades.