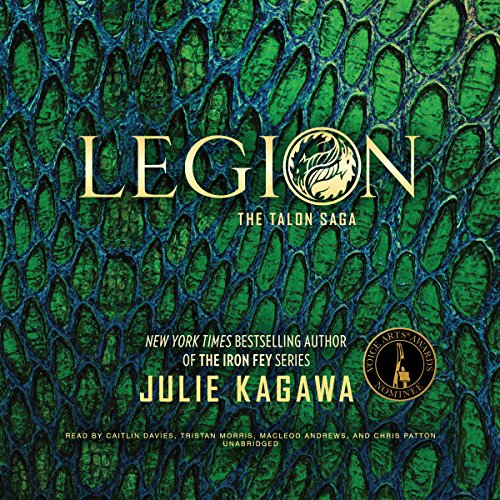 From the limitless imagination of Julie Kagawa comes the next thrilling novel of the Talon Saga.

The legions will be unleashed, and no human, rogue dragon, or former dragonslayer can stand against the coming horde.

Dragon hatchling Ember Hill was never prepared to find love at all - dragons do not suffer human emotions - let alone with a human, and a former dragonslayer at that. With Garret, an ex-soldier of St. George, dying at her feet after sacrificing his freedom and his life to expose the deepest of betrayals, Ember knows only that nothing she was taught by the dragon organization Talon is true. About humans, about rogue dragons, about herself and what she's capable of doing and feeling.

In the face of great loss, Ember vows to stand with rogue dragon Riley against St. George and her own twin brother, Dante - the heir apparent to all of Talon, and the boy who will soon unleash the greatest threat and terror dragonkind has ever known. Talon is poised to take over the world, and the abominations they have created will soon take to the skies, darkening the world with the promise of blood and death to those who will not yield.

What listeners say about Legion

Not a fan of the female narrator!

Overall I liked this instalment of the story. However, with each new part I am liking the female narrator less and less. Her voice is whiny and it gets quite annoying after a while. If I wasn't interested in how the story will end I would drop it now just because of her. As it is I think I can take one more books worth and that'll be it. Male narrator is very good and the story is developing nicely.

I've had enough, thank you

I have been enjoying this series and I recommend it for the fans, but after going through life and death situations and being on the run, you would think that Ember would have matured a little. After 11 chapters, when I got to the "I'm bored" (again) and "He's my brother" (again) whine, I stopped the book. It's a shame that there is the perfect soldier, the caretaker of many, and the tech wizard all stuck with useless, dangerously stupid Ember. By the time I had reached my tolerance level with Ember's stupid self, I didn't care if the brother chained her in a dungeon, slit her throat, or crowned her queen. And to have one of the guys end up with her, ugh. Some characters are really too stupid to live - Ember just ruined the whole series for me and I will not continue.

Not the best in the series

The beginning of the book moved very slowly. it revisited many parts from the first book, but from a different perspective.

These books are an escape, but

MacLeod Andrews is the only good narrator. Bad narration can't cover the plot holes, but I still enjoy escaping to these books.

Seemed like the main character is getting more and more stupid and making reckless decisions. Not sure why. But it isn't good plot to make good characters suddenly go stupid. Not sure what will happen next.

Listening to this book was painful. I'm not sure if the terrible acting got in the way of the story or if the story was just awful too. Did I already say the acting was bad? Oh yeah, and the acting was atrocious.

I had to quit! I've read all of this series and it's worth reading but the female narrator is terrible. If I could, I would return this audible version. The males are good but when Caitlin starts, it's all I can do to struggle through it. I made it about half way through and just quit. I own the kindle version so I can finish reading it myself when I have time to sit and read but that will be awhile. Good story so far.

Another fast paced and thrilling book!

I am really enjoying this series.

It’s fast paced and the plot twists keep me on the edge on my seat.

I’m really looking forward to the last book of the series, but am also rather sad that soon this story will come to an end.

Thank you for a great job to both author and narrators.

Getting better and better.

Each installment of this series definitely keeps you wanting to know just what exactly is going to happen next!

BTW, Ember is still annoying me with her impulsive stupidity. She does things just for the sake of rebelling, not for actual valid reasons. At least some of the time. Drives me batty.

The narrator was great and the story has a great plot of action , romance , and comedy.