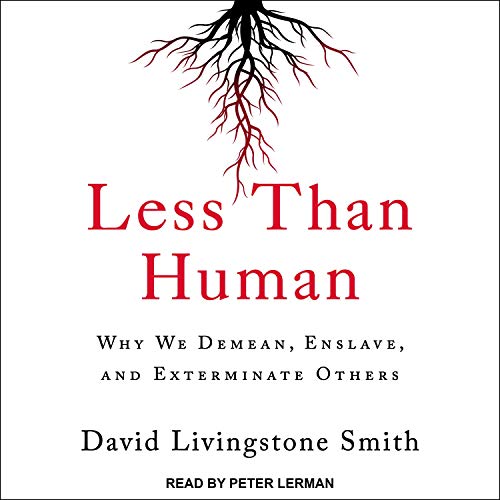 A revelatory look at why we dehumanize each other, with stunning examples from world history as well as today's headlines.

"Brute." "Cockroach." "Lice." "Vermin." People often regard members of their own kind as less than human and use terms like these for those whom they wish to harm, enslave, or exterminate. Dehumanization has made atrocities like the Holocaust, the genocide in Rwanda, and the slave trade possible. But it isn't just a relic of the past. We still find it in war, genocide, xenophobia, and racism. Smith shows that it is a dangerous mistake to think of dehumanization as the exclusive preserve of Nazis, communists, terrorists, Jews, Palestinians, or any other monster of the moment. We are all potential dehumanizers, just as we are all potential objects of dehumanization. The problem of dehumanization is everyone's problem.

Less Than Human is the first book to illuminate precisely how and why we sometimes think of others as subhuman creatures. It draws on a rich mix of history, evolutionary psychology, biology, anthropology, and philosophy to document the pervasiveness of dehumanization, describe its forms, and explain why we so often resort to it. Less Than Human is a powerful and highly original study of the roots of human violence and bigotry, and it is as timely as it is relevant.

What listeners say about Less Than Human

This is such a powerful book and the message of the danger of seeing some as "other" is something we all need to take a look at for ourselves.