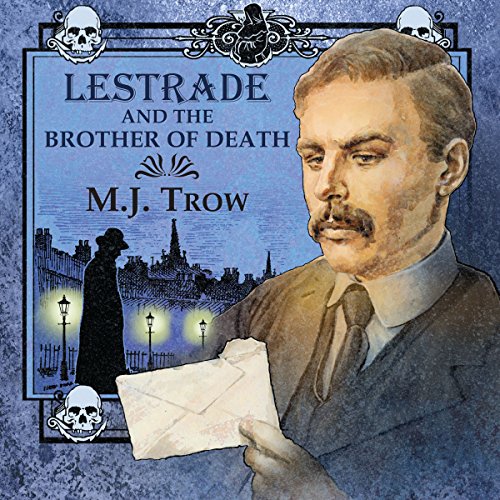 Lestrade and the Brother of Death

Recovering from a broken leg after his ignominious fall from the Titanic, Lestrade should have had a peaceful time convalescing. But an attempt on the life of his future father-in-law makes him realise that a policeman is never really off duty. What is particularly puzzling is the arrival of a letter which simply reads, "Four for the Gospel Makers", and it isn’t the first Lestrade has been sent.

So begins one of Sholto Lestrade’s most mystifying cases, encompassing both the present and the past. He walks down memory lane, looking back on episodes in his career which never came to satisfactory conclusions and hold other clues as to who the sender of the letters is. Because whoever it is is a cold-blooded killer.

What listeners say about Lestrade and the Brother of Death

This was very well read by the author. Led trade is sixty and engaged to be married. A series of events from his past turn out to be linked to the present. Means you can easily take each chapter as its own story while the solution to the overarching mystery remains unclear until the end. I am a big fan of this series.

Fast moving outrageous iconoclastic detective spoof, generally entertaining. Trow never feels he can't speak ill of the dead (many characters and situations did exist, but "it ain't necessarily so" as Trow tells it.)
He does use words many of us find offensive and had hoped never to hear again!
Some allusions to 20th C culture are already dated.
Misquoting Donne's most famous poem seems rather sloppy, from an author who has been a teacher and constantly mocks the lack of erudition of his characters!