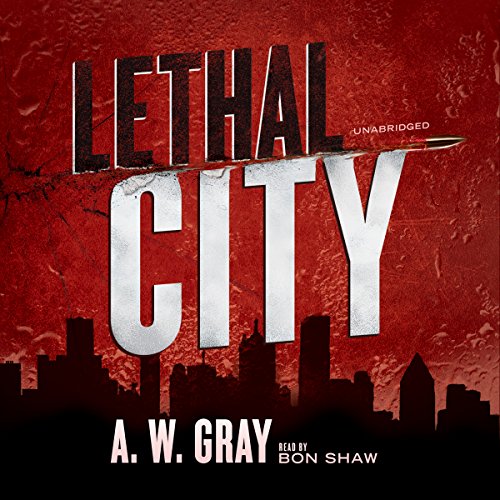 In this suspenseful thriller set in Dallas, A. W. Gray takes us behind the police lines of a homicide investigation and into the private passions that fuel an urban nightmare.

A stolen BMW is recovered with a stash of cocaine, lurid photos, and a charred, dismembered body. Dallas Metro detective Ham Bennosoon connects the victim to a secret circle of family depravity and sexual indiscretion - a mother and daughter who blur the lines between predator and prey.

Are the suspects innocent targets? Guilty avengers?Nothing has ever been proven, and a stone-cold killer is about to strike again.

I am so thankful to have found this gem! It's a stellar police procedural with great cop characters. The narration was pitch perfect.

I hope this becomes a series because the hero is fascinating.

Great Crime/Murder mystery with a twist

Where does Lethal City rank among all the audiobooks you’ve listened to so far?

Have you listened to any of Bon Shaw’s other performances before? How does this one compare?

1st Bon Shaw performance I have heard, but I will listen to many more

The twist at the end -which I do not want to spoil for other readers.

Very Good Book! Bon Shaw's next narrated book is out in February Finding Sheba. I will get that one for sure!!

The story was just confusing at times. There was too much back and forth with the one character that was crazy. I kept rewinding to sometimes the previous chapter just so I could TRY to keep up and figure it out. My head is still aching from this book.
I only used a credit because of Bon Shaw. I enjoy his narration and he did a great job with all the character changes.

I would recommend this book to a friend because the reader's performance makes the world of the story seem genuine. He gives each character a distinctive voice which helps this mediocre detective story seem better than what it is.

The mystery of the story was quite compelling--the characters' being murdered and how they were killed pointed to an angry but clever person. As a reader, I was eager to know "whodunit!" "The little girl" flashback was a bit hokey. I did not think it was necessary. Why not just say the character's name?

Which character – as performed by Bon Shaw – was your favorite?

Randy Dunst was not a likable character, but hearing "him" was hilarious.

Could you see Lethal City being made into a movie or a TV series? Who should the stars be?

This novel could definitely be a TV movie. The major problem is the detective. He has no special, awesome abilities and other characters seem to upstage him. He's a nice guy and all, but why root for him? What good is he? What's his strength? Right now, he's a down-on-his-luck guy who gets a second chance.

I liked the twist, but the detective needed to be "dumbed" down for it to work. Actually, he really should have been fired at the end because his being "unaware" put people at risk and got other cops killed. I guess what I'm saying is--readers/watchers want to see the smartest guy/gal solve the case, and this guy was just like...a normal dude. Boring.

Lethal City has a couple of good twists and holds your interest, until the plot becomes obvious and leaves you unsatisfied with the ending. Overall I would recommend the book and will try both the author and narrator again

Fab story, great twist at the end. Love the narrator, both under this name and his real name.