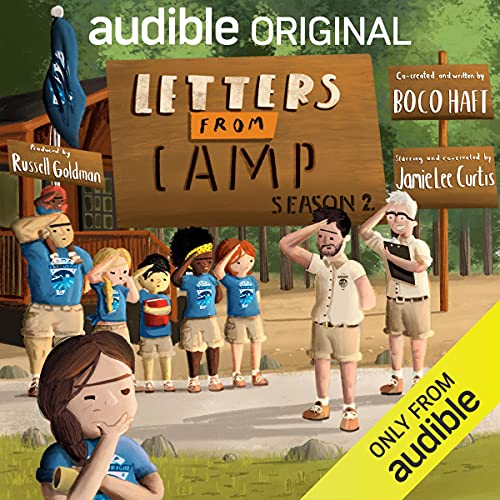 What listeners say about Letters From Camp, Season 2

I have to say I do like the 1st book better but I still enjoyed. It's like a kids murder mystery that adults can enjoy too. The humor is geared towards kids and adults so this is something you could listen to with your kids as well. I will be looking for book 3.

I enjoy hearing to this at work. The characters are funny and relatable. They remind of home. I was 11 in 2005 and it's fun to look back when I went to camp for first time. Definitely will recommend this book to any kid or adult of any age.....

Love this series. they are fun love the voices and the story. will be anxiously awaiting series number three.

Entertaining for the entire family!

My 10 year old son and I loved both seasons! Great performances and very entertaining.

Great for kids and their adults too! Daniel Radcliffe (aka: Harry Potter) is a great addition!

My son and I’s nightly ritual

We fell in love with the first season and we’re hoping for a second. We listen to this audible nightly and are SO excited to have more content. Please keep “Letters from camp” going. We love it!

Another straight binge listen for me - fun, light, enjoyable listen that was easy to get through with good humor infused throughout and interesting storyline.

fun entry in the series

even though this is labeled as a podcast, it's more of an episodical radio play. good thing is that if you just let it run it's a continues story without interruptions. I felt like this story was shorter then the first "season", but it was fun entry in the series. the acting was top notch and continued much of the spirit of the first one. this is basically a story aimed at young teenagers, but as 41 year old i fully enjoyed it and remained me of adventure movies from 80's and early 90's that star kids.

I didn't really like the first one the story was moving very fast from one topic of the story to the next moving over things to quickly, so it was unexpected that session 2 would have improved but it did! the pacing still quick but I understand it from the good story telling not much left me scratching my head like session 1 over all I enjoyed S2 and look forward to a S3.

Love this!!
More please!
Can’t wait to find out what happens next
More Mookie and her adventures

Wish I'd gone to camp

OMG I loved it. I'm very much an adult but I loved the story, the characters, it was such a joy to listen to. will be looking for more.