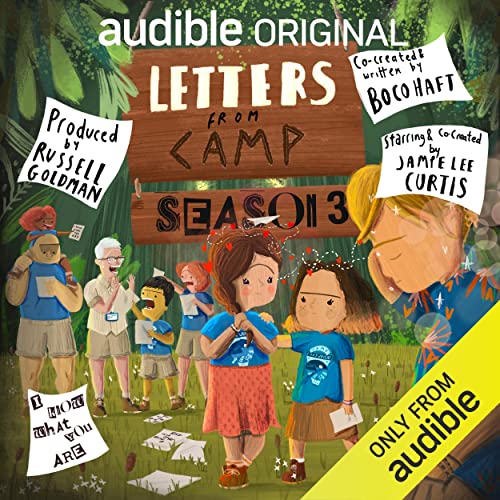 What listeners say about Letters from Camp Season 3: The Last Summer

Still was an amazing job, the series finished up very nicely, it had a more serious tone to it on this, go around yet and still a lot of fun, Fanny made this whole thing shake‼️‼️‼️😂🤣😹. God it's like she got worse, they described her perfectly self destructive, for no damn reason 🙈🙈👀👀😂🤣. I think our main character got a little turned around, it's funny how the "super hero" always wants to be "normal," and the moment they get a taste of it, they don't like you,🙈👀🥴🥴😏😏 I loved it, I love the moral of the story, I love adventures, I love the memory lane, I love the sum it up at the end. great job 😍🥰💯

One of my favorite audio books/ series

I absolutely enjoyed this series. This was the perfect ending season for Letters From Camp. I cried a lot, both sad and happy. I hope I will find another book or series in audio format that gives me the happiness of when I listened to this series. I don't usually do well with mysteries, but this series wasn't hard, and I was always trying to figure out the who done it. I highly recommend this series.

Great for a road trip with the family

The end really got to me after having listened to all of the series. I had tears in my eyes when I learned about Kelly, and it explained the court ordered counseling!

This is a story that begins so light-heartedly and fun. An element of surprise and danger lurk in the first couple seasons. Shenanigans ensue. You relate to one character or another. Or, haha, you WANT to relate to one of them. Some episodes may even make you long for camp. All episodes will surely make you feel thankful for summer and mysteries and quixotic types. Then, that third season. Oof. Excellent listen for a kid who's walking through trauma and needs to hear a story without a totally happy ending unfold and still see the happy in it. Thanks to the cast for the work on this one.

This is one of my favorite originals, I laughed and cried. This series brought back so many memories of camp and it always stayed true to its tone seeing the world through the eyes of a child. Amazing story.

My daughter and I both loved this entire series

My daughter and I both loved this entire series. It reminded me of when I went to camp as a child and gives her a glimpse of camp life.

Excellent performances and smartly written! I have listened to all 3 series and this one is especially heartfelt.

I absoluteley love this series.

I love the whole plot, the characters, the story, the not fitting in. #GoMookie!

It was amazing I loved it I don't want it to be the last summer I really loved the series Fanny got way worse! Kelly made me cry moving and sad. Does it really have to be the end? I loved every one the first one was my favourite. Would recommend to 10-13 and even older.

That's it. Camp over. Fun series. Great acting. Easy to listen to and fun storyline. It's run its course.

So sad its ended.

I love this series and very sad its ending but what an ending. Cast are amazing, storyline was brillant.