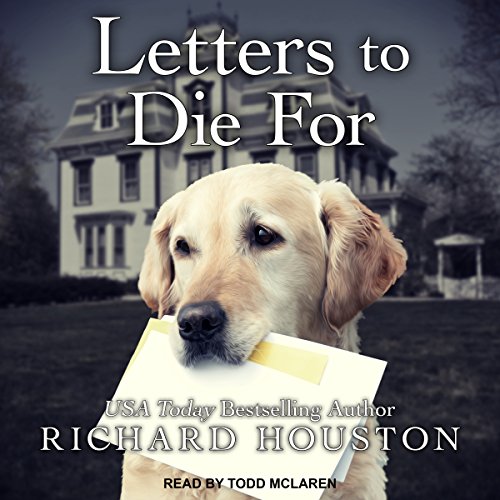 Burned-out software engineer Jake Martin and his golden retriever, Fred, live in a mountain cabin far enough from Denver to escape the rat race but not far enough to escape its crime. While remodeling an old house, he uncovers a stack of love letters that will turn his world inside out.

When word of the letters gets out, people start dying, including the owner of the house Jake was remodeling. With his main source of income gone, he lets his friend and neighbor, Bonnie Jones, talk him into searching for the killer after they are offered a large retainer. The problem is, the person who hires them is the major suspect.

With the help of Fred and Bonnie, Jake continues to find more evidence that his new employer is trying to create a smokescreen to divert attention from himself. Will the trio of amateur detectives be able to stop the murders, or will they become the next victims?

What listeners say about Letters to Die For

In <strong>Letters to Die For</strong> by Richard Houston, Jake Martin, a computer technician-turned-handyman, has found some unopened letters from World War II while working on the home of Debbie Walker. Debbie tells him just to throw away the letters and everything else in the armoire, so Jake takes the letters home with him and shows them to Bonnie Jones, his octogenarian next door neighbor. Bonnie feels really concerned that the unopened letter never reached the woman intended to receive the love letter that would have been sent to her after his death, so she insists that Jake Investigate the letter to find the children of the couple. When Jake finds more letters, Bonnie just becomes even more insistent.

Then the next thing they know, Debbie is dead, and somehow Jake's scaffolding seems to have played a role. Jake thus meets Sergeant Cruz and Debbie's step- sister, Lisa, as he gets involved in this case. Then, he and Bonnie get hired as sleuths, along with Jake's ever-present dog, Fred, who finds key evidence himself, to solve the death. But someone is determined to prevent them from making progress, and more letters keep appearing in the house.

<strong>Letters to Die For</strong> proved to be a creative and fun book that I enjoyed. I somehow got book four without listening to the first three, but except for a couple minor details, I had no trouble with being left behind from details of the previous books. I found myself guessing what would happen all the way through. I did find myself a little confused by details of the ending, but that may be related to the fact that my migraine was bad, forcing me to go back several times to listen again to certain sections.

I enjoyed connecting with Jake, Debbie, and Fred, who were delightful characters in the book. I appreciated the way the senior citizen Debbie is shown as a capable, strong character, determined to participate and not be left out of the investigation, even of the more dangerous situations. And she proves her worth. I liked seeing her relationship with Jake and Fred, as the trio develops a real team. It is fun to see how Fred, the golden retriever, serves as a regular character in the book who never leaves Jake's side and plays the role as Jake's partner.

The audio edition of <strong>Letters to Die For</strong> is performed by Todd McLaren, who sounds a lot as I would picture Jake sounding. He comes across as a middle aged man with a degree of cynicism after his difficult divorce, which came upon his catching his then- wife getting dressed as she was leaving her boss's office. Then she got complete custody of the kids. We can hear some of his pain in his voice at times. I also really like the performance of the role of Bonnie, who sounds like a gentle, empathetic character.

I had fun listening to <strong>Letters to Die For</strong> and enjoyed the details of the letters and the different angles of the investigation. I especially enjoyed the relationships among the individuals investigating the case. I give this book four stars.

Letters to Die For is an entertaining and amusing mystery with a well developed plot and engaging characters. Jake and Fred are a great team. Bonnie is the perfect sidekick. I enjoy this series and look forward to the next book.