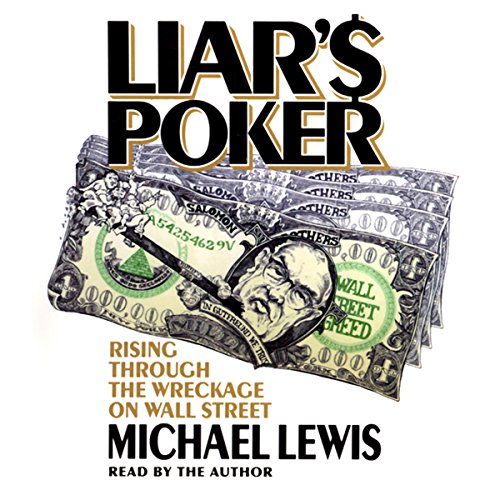 It was wonderful to be young and working on Wall Street in the 1980s - never had so many 24-year-olds made so much money in so little time.

In this shrewd and wickedly funny audiobook, Michael Lewis describes an astonishing era and his own rake's progress through a powerful investment bank. From an unlikely beginning (art history at Princeton?) he rose in two short years from Salomon Brothers trainee to Geek (the lowest form of life on the trading floor) to Big Swinging Dick: a bond salesman who could turn over millions of dollars' worth of doubtful bonds with just one call.

A born storyteller, Michael Lewis shows us how things really worked on Wall Street. The bond traders, wearing greed and ambition as badges of honor, might well have swaggered straight from the pages of Bonfire of the Vanities. But for all their outrageous behavior, they were in fact presiding over enormous changes in the world economy. Lewis' job was to transfer money, in the form of bonds, from those outside America who saved to those inside America who consumed. In doing so, he generated tens of millions of dollars for Salomon Brothers and earned for himself a ringside seat on the greatest financial spectacle of the decade: the leveraging of America.

So memorable and alive...one of those rare works that encapsulate and define an era." (Fortune)

What listeners say about Liar's Poker

This is so infuriating that Audible posts abridged versions of books. This sounding like it could be a great book.

Never get it ABRIDGED!

An amazing book, gives you an insight on the investment banking. I've read the actual book and there are so many interesting details missed in the Abridged version!! Get it in full!!

a loop of soft jazz randomly started playing 45 minutes into the book. The music is the same volume as the narration. It's awful. The story started out well but the author is clearly not a professional reader/narrator.

To eliminate the random music playing throughout the book

What was one of the most memorable moments of Liar's Poker?

Good story, but not well recorded

To eliminate the random music playing throughout the book

A Perspective of the Financial Industry

For most people, Wall Street and finance are mysterious black boxes. This book is a story about one person who spent some time working in Wall Street in the mid 1980's to early 1990's.

For the curious, this book shows some of the inner workings of Wall Street.

For those with connections to the financial sector, this is an eye opener.

For the uninitiated, this is an accessible book which explains complex financial instruments in very easy to understand language.

At only three hours, there's no reason not to get this book.

If you are interested in sales and trading or investment banking in general, this is the book to read.
The mischievous yet exciting inside world of a successful financial institute through the detached viewpoint of a bond salesman is extremely captivating, educative and, above all, entertaining

The full version does not seem to be on Audible. It's disappointing, but this is the only version available.

Music during the recording

Everything was great except I had music randomly pop up throughout the recording and interrupt the book. It was not my phone. Not sure why this happened.

Incredibly disappointing. This is FAR too condensed and leaves out an ENORMOUS amount of detail. Just read the book,You will be infinitely happier. I've never written a really bad review in all my years of being an Amazon customer, but this really felt like a bait and switch. My 83 year old dad gave me this thinking it was the full version of the book. I'm sure he is as just as disappointed as I am.

I read (and enjoyed) the original book years ago and I thought that by listening to a summary it would bring back the original. This didn't work, somehow. It just felt a bit frustrating, clichéd, shallow.

Abridged version is inferior to the full one.

Abridged version is inferior to the full one. They should release a full version. Slightly disappointed.

The book is great and I’m a big fan of ML.

However it seems to be a short version of the book and I can’t find the full length. A few times loud music starts playing over the voice and it is almost impossible to hear the book.

No. Just read the book. As great a writer Michael Lewis is, he just hasn't got a voice that you want to listen to for 3hrs.

Dreary, 'just reading the lines' type oratory. Sounds like a bored man reading a speech from a sheet, instead of a performance.

Recommended and a good read but it’s rather short! Maybe it is a bridged version.

A frank account and synopsis of life in an investment banking environment. You have to evolve into a certain kind of individual to survive the investment world. This book gives you glimpses into what it takes.

This is a must read for anyone interested in the previaling mindsets within the financial services sector. Whilst the focus may be on sales&trading, lewis reveals in great style the universal attributes of financiers, tackling topics from greed to goodwill, he speaks from his own experience and eloquently charts his own personal journey with refreshing honesty.

Waste of money I'm afraid. A boring self-indulgent reflection that fails to live up to a fairly exciting sounding title.

My journey into non-fic started here

Back in 2002 i read this book, as a paper copy, i must say that was start of my non-fiction reading side.
Aftr abt 12 yrs i purchased this book as audible.
Liked the book. :)

What other book might you compare Liar's Poker to, and why?

Micheal lewis:)
Can b compared with - Den of theives,

One hand
One million
No tears

Great easy listener. Only drawback though was the cheesy blue movie music between chapters. would recommend for those with financial interests.

I enjoyed listening to the author reading this short book. It was clear and to the point, no fluff. and I learnt about bonds along the way!

Not sure what i really expected to get out of this book, it had some good insights but being based on time period, im unsure if it would play out the same in this day and age or if you could look to it for much advice.

For those who follow the financial world, the excess spoken of in this book is nothing new.

if i had have known this was an abridged version i would not have purchased it.

interesting inside story however I would have liked to have more details on trades especially when doing the sorting of the market. also the effects on the economy at the time it occurs

summary overview is a good way to describe this.

there is no real detail, rather just a summary of several key events Michael experienced.

A good book if you're interested in market history and finding out about Michael's background. I enjoyed it.

An okay book giving a good insight into wall stree

An okay book giving a good insight into wall street, thanks for the book :)