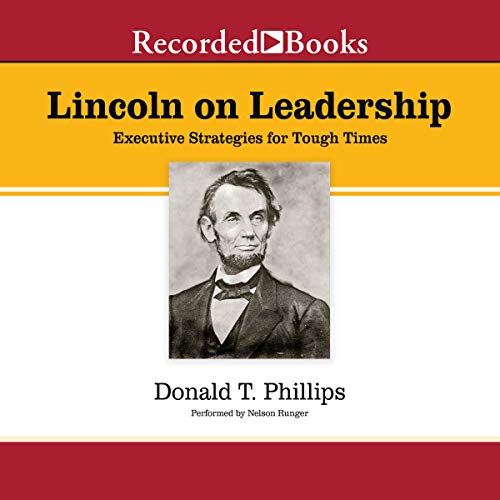 In this remarkable book, hailed by CEOs, politicians, coaches, and college presidents alike, Donald T. Phillips examines Lincoln's effective leadership style. As he explores the President's diverse management skills, he demonstrates how you can succeed with them in today's complex world.

When Lincoln took the oath of office in 1861, the Confederate States had already seceded from the Union. Even though his own advisers expected him to fail, he eventually reunited the embattled states with uncommon good sense. Using historical anecdotes, speeches, and Lincoln's own letters, the author shares the President's practical managerial strategies: seize the initiative, wage only one war at a time, encourage risk-taking while promoting job security, circulate among the troops, and more.

With this compelling portrait, Donald T. Phillips reveals Lincoln as one of the world's most outstanding leaders. Nelson Runger's thought-provoking narration will motivate you to influence others in the same quiet way.

"[Nelson Runger's] energy and pacing carry the listener along." (Booklist)

Phillips did a remarkable job in piecing together this analysis of Lincoln's leadership. It's amazing no one else had written such a book before.

A must-listen for any good manager who wants to be a great leader.

Even though there are two minor nits with the recording (you can hear Runger's breathing inbetween some sections and chapters flow together so it's hard to guess when one ends and the next one starts), I gave it a 5-star rating because of the content. I recommend getting a copy of the paperback version so you can follow these principles day-to-day.

Recommended reading/listening: "Team of Rivals" by Doris Kearns Goodwin, which delves deeper into it.

A few things you should know before downloading

There are a few things you should know before downloading this audio book.

Let’s take the positive first: It is a fast listen – easily finished in a couple of days. It is (as always) narrated to perfection by Nelson Runger. It reveals a lot of interesting and surprising facts about Lincoln – that I bet you did not know about.

And the negative: It is, in my opinion, not a book well-suited for audio. After each chapter, the author summarises the essence in a list of “Lincoln Principles”. I constantly found myself wishing that I had the book in front of me – especially if I wanted to look at the lists later on. Please also be aware, that this is a very unusual mix between a management book and a historic narrative – maybe not appealing to all readers.

Although somewhat disappointed, I have given it three stars anyway – because it has opened my eyes towards Lincoln in a new and more exciting way.

Shallow with some interesting tid-bits

This is an interesting look at one great statesman in Lincoln and a very compelling idea in leadership. It doesn't provide the reader with insight into the reason for good leadership and theoretical aspects of the subjects, but rather gives shallow suggestions for leadership techniques. It is thus repetitive and not very penetrating. It is a well-written survey though and worth taking a listen.

A must read for everyone wanting to lead others!

Would you listen to Lincoln on Leadership again? Why?

Absolutely! This book has taught me so many things! I read or listen to it at least every few months!

Lincoln, of course was my favorite character. The way he was able to put a hold on his irritation, anger, and disappointment is inspiring! I've learned from him that writing down my angst will purge those feelings, giving me a chance to vent yet allowing me time for constructive thoughts to take the place of the negative ones BEFORE I have 'that' conversation! He truly practiced self-mastery!

There are few books or audios that a person goes to again and again for years on end! This is one that has had me doing just that for greater than ten years!

I have been in some form of management and in leadership roles for several years. I was impressed with the reading of this book and simply couldn't get enough. This story detailing the way Lincoln "ministered to and mentored" his subordinates provides great insight to many powerful leadership principles. He was a man ahead of his time. His integrity was his cornerstone that he built all of his relationships upon. His eloquence and deep character are portrayed in a way that I had not heard of before. Many principles taken from his example are right on target.

I will be listening to this book again! there is so much wisdom in this book.

Big fan of the book and Lincoln not the reader

Set your speed x1.5 (faster if you are from a big city up north). Anything faster than 1.5, though, starts sounding like the chipmunks. You will endure A lot of breathing and swallowing, also, but I confess a sensitivity to such noise. That being said, it is a great time to consume this book!! It transcends the popular notion of creating a false sense of urgency and the political/media brand loyalty that has entrenched reason into unreasonable camps.

If only more managers used these principals

I couldn't agree with his leader principles any more. I'm moved by a man who was able to overcome unconscionable adversities throughout his life and continue to stay true to his value of integrity and confidence in himself. I can relate a lot to his story and styles but do not have the ability at this point to empathize with my adversaries with such strategy, grace, and poise as did he. I strive to be able to embody these learnings as I believe them to be the most effective leadership techniques.

Where is a Lincoln when you need him?

This was a great listen. I love the history but I really liked the way the author taped into President Lincoln's leadership style. I kept thinking what a diffrent world it would be if we still had Presidents of this caliber in the White House.

The only thing I did not like about the book was the times when the author went to far into the details.

But the physical book.

I initially borrowed this from the library, but I had only read about a third of it before I had to return it. I eventually bought the Audible and listened until about two thirds of the way through before I took a break and listened to Manhunt: The Twelve Day Chase For Abraham's Killer. Then I returned and finished Lincoln On Leadership.
I really love this book, but the audio version is difficult to listen to. I definitely recommend the print version unless you're the type who can listen to a book intended to be studied. For an example of how this book does not translate well to audiobook: Every chapter begins with a quote and ends with a review of quotes in the form of "Lincoln's Principles," but with the audiobook, these run together, because the quote at the start of the chapter is read before the chapter number and title.
There are many principles that Lincoln held to that I wish we saw more of today. It was funny to hear that in the 1860s President Lincoln preferred to be silent in public due to the media scrutinizing and misinterpreting every little thing that was said.
It was a little bit scary to see so many parallels from issues in Lincoln's time to modern issues. Truly an incredible President.
And breaking from this to read Manhunt was heartbreaking because Manhunt begins by recounting the day of Lincoln's assassination. Although sad, I highly recommend that book as well.
I think I'd really have to read the physical book to get the most out of Lincoln On Leadership and give it a worthwhile review. There are so many bits that have slipped past me as I was listening while simultaneously doing other things. Definitely a book for the shelf, and worthy of highlighting from beginning to end.

I heard reference to this in a book and I felt a bit of History mingled with leadership would be interesting and also a good book to listen to on the move. Oh dear a book best skimmed at best. Rather dated and neither a great history book or leadership book. Not sure there are any real take aways and sounds very dated... then again the book was written some time ago.